The law relating to the offence of Armed Robbery is in section 75A of the Crimes Act 1958 Victoria. Armed Robbery is committed when a person is armed with an offensive weapon, such as a firearm or a knife, while committing a robbery.

Have you or a loved one been accused of Armed Robbery? You must call our office to arrange a conference with one of our experienced criminal defence lawyers. You may receive a prison sentence if your case is not handled properly. 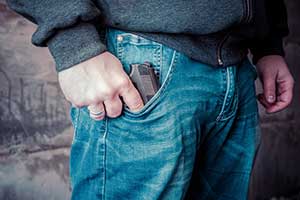 The police will interview you about an allegation of Armed Robbery if they believe you are responsible. The interview is an information gathering process for the police. It is not normally the time or place for you to offer an explanation of where you were and expect that charges will go away. Normally, the police will have gathered evidence against you before interviewing you. Therefore, it is important that you speak with one of our lawyers before your interview.

You may want to know:

One of our experienced lawyers can represent you in defending an allegation of Armed Robbery. Our lawyers will carefully analyse the evidence to look for issues which can be highlighted at court. Our lawyers are pro-active and will look for evidence the police have over-looked to demonstrate they have accused the wrong person. For example, our lawyers will consider:

Our lawyers will work hard with you to show it was not you who committed the Armed Robbery.

Our firm has in-house counsel who run trials in the County and Supreme Courts. They can get involved in your case from the beginning so you will have two lawyers working on your case.

You must get advice from one of our lawyers before you decide to plead guilty to Armed Robbery. Armed Robbery attracts a prison sentence and you must be informed of the consequences before you agree to something you may not completely understand. Preparing for a plea hearing to Armed Robbery is a delicate process. Our lawyers will carefully go through the brief with you to make sure you understand what you are accepting responsibility for. Our lawyers will also advise you of all the things you should do to get you the best possible outcome in court. 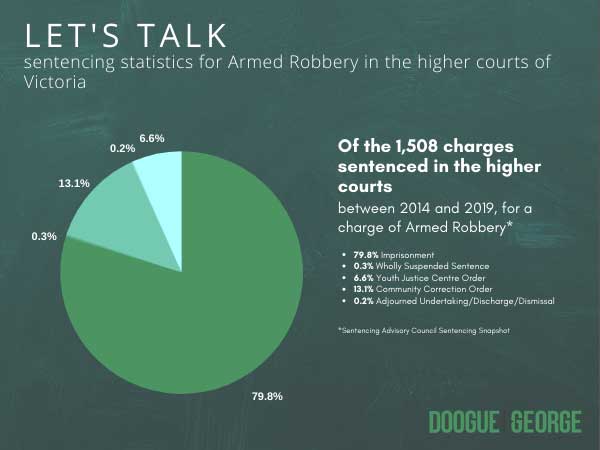 Aside from general defences such as mistaken identity and factual dispute, defences to this charge can include duress imposed on the accused by another, lack of intent and the concept of beyond reasonable doubt. Lack of intent can be a defence to this charge on the premise that the prosecution must prove that the accused had the intention to permanently deprive the victim of the item that was the subject of the theft.

Penalty and sentencing for section 75A of the Crimes Act 1958

Armed robbery (s75A of the Crimes Act 1958) is an indictable offence, which means that it is triable by a judge and jury in the County or Supreme Court. It carries level 2 (25 year) imprisonment as a maximum penalty, which is the second highest maximum penalty behind life imprisonment.

This offence can only be heard in the County or Supreme Court as it is a strictly indictable charge which means it can not be heard summarily in the Magistrates’ Court.

Armed Robbery: Elements of the offence

Section 75A of the Crimes Act 1958 defines the elements that the prosecution must prove beyond reasonable doubt to satisfy a charge of armed robbery:

A person will be guilty of armed robbery where:

It is a two-step process to satisfy a charge of armed robbery. The elements of this charge, in essence, is firstly where a person commits any robbery (that is a theft with violence) and secondly, at the time has with them one of the items listed above.

Robbery
The offence of robbery is set out in section 75 of the Crimes Act 1958. To prove this offence, the Prosecution must establish beyond reasonable doubt the following elements:

The accused committed theft
The first element the Prosecution must prove is that the accused committed a theft (stole something). A person steals if he or she dishonestly appropriates property belonging to another and does so with the intention of permanently depriving the other of the property. An intention to temporarily deprive the owner of his or her property is not enough to meet the elements required of a theft.

Whilst committing the act of theft, there needs to be present an aggravating feature that is violent in nature. The Prosecution must prove that the victim parted with the property taken as a result of the violence or a threat of violence by the accused.

It is important to note that the act of theft can be a continuous act. The force applied or fear induced can occur at any time prior to the act of stealing being complete.

The accused did so in order to commit a theft.
Lastly, the force must have been used or threatened in order to carry out the theft.

Armed
The second element the prosecution must prove to satisfy a charge of armed robbery is that the accused had with them a firearm, imitation firearm, offensive weapon, explosive or imitation explosive with him or her at the time of the theft.

The accused must have possessed one of the described items for the purpose of the robbery. This element will be satisfied if the accused had on their person, at the time of the robbery, an article readily available for use. On the other hand, a person does not have an article with them for the purpose of this element if it is packaged in a way that it cannot be used (for example, if it is contained within a sealed packaged in a bag).

If the accused is unaware that he or she had the article on their person, they cannot be found to have possessed it for the purpose of the robbery. However, an article may be “used” by doing more than drawing attention to its existence.

Check out some of the criminal cases we’ve defended in court that involve the offence of Armed Robbery:

The majority of people who plead or are found guilty of this offence will face a term of imprisonment. In the case of Roberts, Hunt CJ quoted the words of Wood J in Maddocks:

[I]t is only in the most exceptional circumstances that anything other than a non-custodial sentence should be imposed for armed robbery. Necessarily, there will be cases which constitute an exception but they will be few and far between.
The particular circumstances of the offence will determine the gravity of the offence, which will in turn determine whether a term of imprisonment will be imposed, and if so, how long it will be.

The sentencing Judge will commonly consider: