Home » miscellaneous » Proposal of marriage in court by barrister

Proposal of marriage in court by barrister 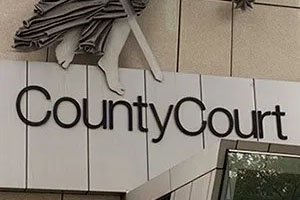 There was a marriage proposal by a Barrister to the instructing Solcitor during a proceedings in the Melbourne County Court a couple of weeks ago.

It is not something I have ever come across before and so thought I would post what was forwarded to me.

The Barrister was smart enough to choose a very good Judge to do it in front of but I am not sure about proposing during a sex trial. Whatever else you might think you have to applaud his confidence .

Transcript follows –
MR MOEN:  Only a personal matter Your Honour – – –
HER HONOUR:  Yes?
MR MOEN:  – – – and it doesn’t go to the case at all, but I just wanted some witnesses to see whether Ms Hrvatin would marry me.  I’m asking her now in Court.  Would you?
HER HONOUR:  Right.  Will you marry him Ms Hrvatin?
MS HRVATIN:  Absolutely Your Honour.
HER HONOUR:  Right.
MR MOEN:  I just needed some – – –
HER HONOUR:  Do I have to perform the ceremony?
MR MOEN:  No, I was just going to ask you.  I just needed some witnesses to that and I might have to get the transcripts.  I want to get an urgent copy of that, if that’s all right?
MR JONES:  As Ray Lopez would say;  (Indistinct).
MR MOEN:  And it’s no reflection upon her acceptance of that.  She won’t be here for the remainder of the week.  She has other commitments.
HER HONOUR:  Right.
MR MOEN:  I thought I’d just go on the record for saying that Your Honour.
HER HONOUR:  All right, thank you.  It’ll be a most interesting transcript and you have my heartiest congratulations.
MS HRVATIN:  Thank you.
MR MOEN:  May it please the court.
HER HONOUR:  Right.  Then, on that happy note I shall adjourn.
MR MOEN:  May it please the court.
ADJOURNED UNTIL TUESDAY 25 OCTOBER 2011