Home » miscellaneous » It’s a sin to kill a mockingbird

It’s a sin to kill a mockingbird 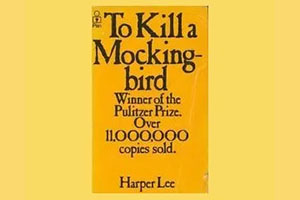 As the news was made public, early this year of an impending release of Harper Lee’s second (Sequel? Prequel? Draft?) ever novel, the literary world was more than aflutter. The author of To Kill a Mockingbird had only that single novel published, in 1960, but that was enough. A Pulitzer Prize honour was bestowed, a movie was made (mercifully, in the era that it was), millions of copies are still sold every year and Ms Lee eschewed the spotlight.

To Kill a Mockingbird is a single tale, unhindered by other stories told in the same setting or prose. The characters remain preserved in the pages of that single book; also preserved in our hearts and minds. Scout! Jem! Dill, Boo, Calpurnia. And Atticus. Oh, Atticus.

Atticus Finch. Man. Father. Lawyer. It has been inferred that Atticus has influenced more aspiring lawyers than any real person living or dead.

It is an American Modern Classic of Literature. But even though set in the Deep South, as an Australian, growing up in the 1990s, so far removed culturally, the novel resonated. I didn’t expect it to. I was in year 7. It was part of the older years’ English curriculum for that year. My brother, 3 years my senior, tried out his previously successful ploy of asking me to read it and gleaning the main points from me as he approached his written submission. I read books with absolute zeal at that time in my life and accepted the novel, with a slight indifference, further enhanced by the plain orange cover with the black type-written font unceremoniously declaring title, Pulitzer Prize winning status and boasting “Over 11,000,000 copies sold.” The word Mocking-bird was even hyphenated over two lines, which chafed my graphic-designer-in-training soul.

But I devoured it.

And like most, I suspect, would read it many times over the ensuing decades. The film, casted gloriously, would reaffirm our love for all the characters. The capricious, bright and wide-eyed Scout; Jem wise beyond his years; the absolute Lord of Moral Standing and Everyone’s Favourite Father (if not their own), Atticus, impeccably fleshed out by Gregory Peck.

I could go on. But this is not a critical study. We’ve all, probably, completed one of those for year 10 English. We all know what the story represents. What the characters represent. And what they mean, individually, within our own interpretations and applications of lessons learned through art.

The significance of this novel was huge. For Americans, globally, within the literary world. So when it was reported that there was another novel to be published, the collective squeal was almost audible. Actualy, mine was. Then there were the reports that followed. And the “pop” from the burst of my balloon, was also, almost audible.

The novel released as Go Set a Watchman is supposed to be the original transcript from which Mockingbird was eventually derived. Set 20 years later, narrated by Jean Louise Finch as an adult, it was rejected by Lee’s publishers. This draft was then reimagined, reworked and revised into the book we know today. But now this transcript has been discovered and published, unedited, into a novel, breaking book sale records on its day of release.

How, after 55 years, after Lee abandoned all subsequent writing endeavours, did this manuscript come to life? Why, after all these years is this draft copy being released, apparently endorsed by the post-stroke, frail, fiercely private octogenarian? Smells like fish to me. The kind of fish that stinks like big money.

So now it has been released and there is further uproar. Atticus isn’t Atticus; no more. Not the one we know. Not the one we love. Oh, Atticus! Those that bear your name, monikered by well-meaning parents to bestow upon their sons all the attributes that the name suggests are now left in disarray.

It no longer makes sense!

Atticus said to Jem one day, “I’d rather you shot at tin cans in the backyard, but I know you’ll go after birds. Shoot all the blue jays you want, if you can hit ‘em, but remember it’s a sin to kill a mockingbird.” That was the only time I ever heard Atticus say it was a sin to do something, and I asked Miss Maudie about it. “Your father’s right,” she said. “Mockingbirds don’t do one thing except make music for us to enjoy. They don’t eat up people’s gardens, don’t nest in corn cribs, they don’t do one thing but sing their hearts out for us. That’s why it’s a sin to kill a mockingbird.

I haven’t read the book, apart from chapter one, released early to the press to whet the whistle of those eagerly champing; and I don’t think I will. In fact, I won’t.

I won’t read Go Set a Watchman. To me, it exacts the very sin it aims to endure.

I will keep the mockingbird’s sweet song alive in my mind.