Tyson Manicolo is a criminal solicitor who heads our Broadmeadows office. He appears daily in the Magistrates’, County and Children’s Courts of Victoria on pleas of not guilty, pleas of guilty, bail applications, appeals and intervention order matters. Tyson is also experienced in writing submissions for people at risk of losing their firearm or security licences. 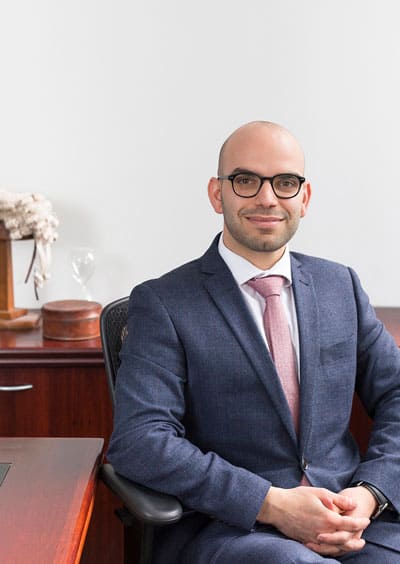 Tyson was admitted to practice in 2016.

Tyson has been at Doogue + George Defence Lawyers since January 2018. During that time, he has worked from our Broadmeadows office.

Prior to working with Doogue + George, Tyson worked at a generalist firm based in the city practising in criminal and civil matters. It was here that Tyson realised his passion for criminal law and he decided to pursue a career focusing only on representing people charged with criminal offences.

Tyson is experienced in defending people charged by Victoria Police with all offences heard in the Magistrates’ and Children’s Court such as:

Tyson is also experienced in representing people charged with all offences heard in the County Court such as:

Examples of having charges withdrawn

Tyson has achieved fantastic outcomes for his clients in the past.

For example, he successfully persuaded Prosecutors to withdraw all charges against our client who was charged with making threats to kill by highlighting the discrepancies in the victim and witnesses’ evidence.

In another case where our client was charged with family violence offences, Tyson successfully had the charges withdrawn. Tyson engaged an interpreter to translate text messages the victim sent to our client in another language admitting to making up the allegations so that he could present them in Court.

Tyson has a particular interest in contested bail applications heard in the Magistrates’ Court.

Tyson has written extensively on bail, including the amendments parliament made to the Bail Act in 2018. He contributed to the Bail section of our website and has written blogs on how to improve the prospects of bail.

Tyson is familiar with support services such as CISP bail and residential drug rehabilitation clinics and has used these services to secure bail for his clients.

Through careful preparation, Tyson has achieved bail for clients who have had to show that compelling or exceptional circumstances exist before being granted bail.

In a recent example, Tyson secured bail for a client who had committed further offences soon after being released on bail. Prior to the hearing, he organised a drug rehabilitation program for our client to attend, support letters and a support person to attend Court to give evidence in support of our client.

Tyson has experience in the appellant jurisdiction of the County Court. He has assisted clients in successfully appealing their sentence and conviction.

Clients who appeal their outcome generally feel aggrieved because their previous lawyer did not present all of the mitigating material they should have to the Court resulting in a severe penalty. Therefore, Tyson takes the time to communicate with his clients and their families to understand why they feel that their outcome was excessive and gathers as much mitigating material as possible so that he can try to correct the error on appeal.

Family Violence Intervention Order and Personal Safety Intervention Order matters (‘IVO matters’) can have devastating consequences on people if not handled correctly. They can impact people’s ability to communicate with loved ones and hold firearm licences.

Tyson has represented many respondents to IVO matters. He has devised strategies which have resulted in favourable outcomes for our clients.

For example, Tyson appeared for our client who opposed the applicant applying for a full Family Violence Intervention Order. Tyson prepared for the hearing by gathering evidence, speaking with witnesses and drafting affidavits with witnesses. During the hearing, he presented the evidence and carefully cross-examined the applicant. After reviewing the material, the Magistrate found in favour of our client and struck out the application.

Tyson has developed a strong practice in writing submissions to statutory authorities on behalf of people at risk of losing their licence because of pending criminal matters.

Tyson realises that it is important to his clients’ livelihood that they continue to be licenced so that they can continue to work in their chosen profession.

Tyson understands that being accused of wrong-doing by the Police is daunting for his clients and their loved ones. He also realises that the Court process is overwhelming for most people. This is why he ensures that he takes the time to provide his clients with clear advice and maintains regular contact with them so they know what to expect at Court.

Tyson works tirelessly to achieve the best outcome for his clients by meticulously preparing his matters before attending Court. Tyson dedicates a lot of time to carefully preparing matters, which has seen him convince Prosecutors to withdraw charges, avoid gaol sentences for clients pleading guilty to serious offences and persuade Magistrates not to record a conviction against his client’s name.

When representing clients in trials in the County Court, Tyson believes that it is vital to the success of the case that a case strategy is developed early on. Therefore, he spends as much time as is needed in getting instructions from his clients and pursuing every possible avenue which may lead to charges being withdrawn or an acquittal.

Tyson holds a Bachelor of Laws and a Bachelor of Legal Studies from La Trobe University and a Graduate Diploma in Legal Practice from the College of Law.