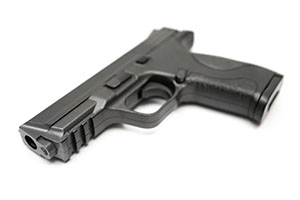 It is well known in our community that a breach of the law can directly and adversely affect certain privileges and rights we may hold dear.  An offence of driving over the prescribed concentration of alcohol, will, in Victoria, result in mandatory license disqualification. Regarding driving at an excessive speed, a period of license suspension will follow.  The operation of criminal law can curtail property rights. In Victoria, we have a well-established system of laws pertaining to property obtained through the proceeds of crime. Property, in this sense considered ‘tainted,’ will be forfeited to the State.

In contrast, this article purports to briefly outline how the making of Intervention Orders (civil in nature as opposed to criminal) can adversely affect an individual’s ability to possess and utilise a firearms license. In particular, the concept of a ‘prohibited person’ will be discussed as it operates with respect to the Firearms Act 1996 (Vic) and the two Intervention Order statutes in Victoria, namely, the Family Violence Protection Act 2008 (Vic) and the Personal Safety Intervention Orders Act 2010 (Vic).

In Victoria, an individual adversely harmed (according to the threshold requirements under the IVO Acts) by the actions of another, can apply for either a Family Violence Intervention Order (FVIVO), or a Personal Safety Intervention Order (PSIVO). The type of Order sought will be determined by the nature of the relationship between the applicant (the person seeking the IVO) and respondent (the person to whom the IVO is directed). Both types of Orders can have adverse consequences for respondents who possess a firearm license.

It should be noted that the ‘prohibited person’ declaration is not a classification that is announced, at the time of the making of an IVO, but rather is activated through operation of the Firearms Act 1996 (Vic) and the making of a final IVO.

Section 3 of the Firearms Act 1996 (Vic) sets out various events which trigger the declaration of a ‘prohibited person’ status.  Predominantly, these events are connected with criminal offending.  That is to say, they are concerned with:

However, the definition of a prohibited person includes Final Intervention Orders (Personal Safety and Family Violence),  unlike the previous types of categories delineated under section 3, Intervention Orders are made on the civil standard, on the balance of probability, rather than the criminal standard of beyond reasonable doubt.   The relevant portion of section 3 of the Firearms Act 1996 provides:

(i)     a final order under the Family Violence Protection Act 2008 that does not include conditions cancelling or revoking a licence, permit or authority under this Act, or an order of a corresponding nature made in another State or a Territory; or

(ia)     a final order under the Family Violence Protection Act 2008, that does include conditions cancelling or revoking a licence, permit or authority under this Act, or an order of a corresponding nature made in another State or a Territory; or

(ib)     a final order under the Personal Safety Intervention Orders Act 2010 that does not cancel or suspend a licence, permit or authority under this Act, or an order of a corresponding nature made in another State or a Territory; or

(ic)     a final order under the Personal Safety Intervention Orders Act 2010 that does cancel or suspend a licence, permit or authority under this Act, or an order of a corresponding nature made in another State or a Territory; or

Section 3(c)(i)-(ic), of Firearms Act 1996 (Vic) (the Act), makes it clear that it is the making of a final order that creates the prohibited person declaration.

Depending upon the terms of the final order, an individual’s firearm license will be subject to suspension (Section 47A) or immediate cancellation (Section 46).

Some persons for which a current firearms license is a mandatory requirement for their employment (for example, security guards, police officers, farm hands) stand to lose their livelihoods as a result of being declared a prohibited person.

Where the IVO is in connection to allegations of criminal offending a private security guard, might also receive notice of an intention to suspend and or cancel their private security license (refer sections 47 and 25(2) of the Private Security Act 2004 (Vic).

Respondents to IVO’s are entitled to contest the application, and both the FV Act and the PS Act provide for mechanisms for the making of interim orders pending the final determination of the application.

It is important to note that Orders made on an interim basis can require a respondent to surrender all firearms they hold (section 115 of the Family Violence Protection Act, and section 158 of the Personal Safety Intervention Order Act).  By operation of section 171 of the FVPA, a firearms condition inserted into an IVO, cannot be appealed, and a respondent cannot apply under Section 189 of the Firearms Act 1996 (Vic) to be deemed not to be a prohibited person.

A respondent cannot make an application to have these firearms returned unless they successfully defend the application, or the Order is withdrawn, or a final IVO order does not contain a notation or clause adversely affecting their firearms license.

A successful defence of an application would avoid a respondent being declared a prohibited person.

However, for various reasons (some strategic, some of a pecuniary nature), applications for IVOs are not always contested, and the parties may seek to negotiate a final order by consent. This often occurs on a consent ‘without admission’ basis.

As a final order will automatically trigger the prohibited person declaration, it becomes critical to the respondent’s interests to ensure that the final order does not contain a clause or condition that adversely affect their firearms license.

This is important because the gate-way to an application to be deemed a non-prohibited person, (thereby restoring all the privileges that come with a firearm license), must be through Section 189 of the Act.

It is also very important to note that an applicant who is subject to an immediate suspension of their firearm license(s) on the basis of being the respondent to a final Intervention Order, that does not contain an adverse firearm condition (pursuant to Section 47A of the Act), must make their application under Section 189 within 3 months of the final IVO order being made or face immediate cancellation after that period has elapsed Section 49(4) of the Act.

An application to be deemed not to be a prohibited person

(a)     is deemed not to be a prohibited person by virtue of being or having been subject to a final order of a kind referred to in that subparagraph; or

(b)     is so deemed for limited purposes only.

(a)     is deemed not to be a prohibited person by virtue of being or having been subject to an order of a kind referred to in that paragraph; or

(b)     is so deemed for limited purposes only.

Note that for our purposes, Section 189 refers back to the definition of ‘prohibited person’ in so far as limiting the scope of the application to final IVO’s that are silent as to the matter of a respondent’s firearm license.

If a final order does contain notations or conditions adversely impacting a respondent’s firearm license, that person must either seek a variation of the final order or appeal the making of the Order, insofar as it contains the adverse firearm condition. Where no appeal/variation is sought, or where the variation/appeal is unsuccessful, the prohibited person status continues for 5 years (see also Stephenson v Lebessis [2014] VSC 498).

The application is made to the court by completing prescribed court form this form is available from the court.  The form is available on-line through the Magistrates’ Court of Victoria website. The applicant must specify the grounds (say for example employment reasons) for which they seem to have an order that they be a non-prohibited person, also the purpose for which it is intended to use a firearms license (i.e. hunting, employment, sport/target shooting).

After completing the form, it is to be lodged with the court and a copy served at that time for chief commissioner, the court will specify a hearing date for the application proximately 1 month after it is lodged.

Section 189 provides that a person who is protected under a final IVO is to be served with a copy of the application, and may attend the hearing, and be heard at the hearing.

For further information please refer to Victoria Police website or the Magistrates’ Court of Victoria.