Kate is one of our senior associates and is part of our Sunshine team. She regularly represents clients at the Sunshine Magistrates’ Court for various criminal legal issues.

Admitted to legal practice in 2002, Kate has since been working exclusively in the field of criminal law. She has experience in all Victorian criminal law jurisdictions including in the High Court of Australia. 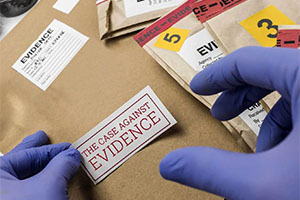 In criminal law proceedings, complex rules of evidence can be the cause of lengthy legal argument. In contrast, in contested Family Violence Intervention Order Applications, Section 65 of the Family Violence Protect Act (‘the Act’) provides that the Court ‘… may inform itself in any way it thinks fit, despite any rules of evidence to the contrary.’

This means that evidence excluded in a criminal matter may be admissible in a Family Violence Intervention Order Contested Hearing. The Act also allows the Court to refuse to admit evidence, or to limit the use of particular evidence, if it is fair to do so.

If you are the Applicant or Respondent in a contested Family Violence Intervention Order matter, it is important to engage an experienced legal practitioner to ensure that your matter is properly prepared, and to achieve the best possible outcome.

What documents should I give my lawyer for a Family Violence Intervention Order matter?

Behind each Application for a Family Violence Intervention Order is the story of a relationship. Whether you are an Applicant or a Respondent, to help you tell your story to your lawyer you should provide them with:

It is important that you provide your lawyer with as much relevant information as possible in the early stages of proceedings. Your lawyer can then assess what evidence will assist you to best represent your case at a Contested Hearing.

She has made all these allegations against me in the Application for an IVO which I can prove are wrong. Will the Court get to see that?

The Respondent’s lawyer will have an opportunity at a Contested Hearing to cross-examine the Applicant with respect to inconsistencies and impossibilities apparent in the allegations.

For this reason, it is important that Respondents provide their lawyer with comprehensive and detailed instructions in relation to each of the specific allegations against them. The Court may ultimately refuse an Application where significant details of an Applicant’s allegations are effectively called into question at the Contested Hearing.

He was physically abusive towards me when we were together, but we have been separated for years. There hasn’t been any physical violence towards me during handover with the children, but he quietly verbally abuses me. I’m scared. Is that enough?

In determining an Application for a Family Violence Intervention Order, the Court is most concerned with allegations of recent prohibited behaviour by the Respondent.

Separated partners are often in the difficult situation of continually being drawn together as a result of on-going custody and access of the children. While the Court may admit evidence of historical abuse in the relationship, it should be presented by the Applicant’s lawyer as context to recent behaviours. The Court may then be in a position to fully appreciate the weight and effect of alleged recent behaviours, and whether it is likely to continue unless the Court intervenes by granting a final Intervention Order.

My neighbour saw my partner assault me, but he doesn’t want to come to Court. Can he provide an affidavit instead?

Understandably, people can be nervous about attending Court to give evidence, particularly as an otherwise uninvolved bystander.

Section 66 of the Act provides that the Court may admit evidence given by a person by affidavit or sworn statement. However, this rarely happens in practice. This is because the Act also provides that with the leave of the Court, a person giving evidence by affidavit can be called as a witness at Court to be cross-examined.

If served with a sworn statement prior to a Contested Hearing, an experienced legal practitioner will put the other party on notice that leave will be sought from the Court to cross-examine the author of the affidavit. If leave is granted, the witness is required to attend Court to be cross-examined about their sworn statement in any case.

Ultimately of course, it is a matter for the Court whether to permit a sworn document as evidence, and whether to grant leave to the other party to cross-examine the author.

Since I received the Interim Order, I have sought professional help and I am really trying to change. Will that help to defend the Application against me?

To grant a final Intervention Order, the Court must be satisfied not only that family violence has probably occurred, but that it might continue in the future. Accordingly, if the Respondent is able to demonstrate that there has been no further prohibited behaviour, and that in fact efforts have been made to positively change behaviour, this can assist in successfully defending an Application.

It is often the case that there is a significant period of time between a Respondent being served with an Application for a Family Violence Intervention Order, and the matter finally being heard before the Court at Contested Hearing. It will assist a Respondent if they are able to bring to a Court evidence of their own efforts to modify their behaviour. This might be in the form of successfully completing a Men’s Behaviour Change Program, post separation courses, anger management courses, drug screen testing or liver functioning testing. The production of independent evidence of lifestyle changes by the Respondent can be relevant and important evidence at a Contested Hearing when submissions are being made on behalf of the Respondent with respect to future behaviours.

Whether you are an Applicant or a Respondent to a contested Family Violence Intervention Order Application, it is important that you obtain legal representation from an experienced practitioner to ensure that your case is thoroughly prepared and for the greatest chance of achieving your desired outcome.