Josie Giarrusso was admitted to legal practice in November 2020 after completing a Juris Doctor at the University of Melbourne. She was a Judge’s Associate at the County Court of Victoria for two years before she became a lawyer of Doogue + George.

Whilst an Associate, Josie worked exclusively in the field of criminal law, dealing with matters such as pleas, jury trials, and appeals. She also volunteered for the Human Rights Law Network (India), Victoria Legal Aid, Refugee Legal, and the Victorian Equal Opportunity and Human Rights Commission. 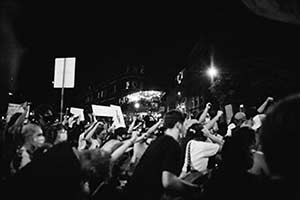 No doubt you would have seen in the news recently that people protesting against COVID-19-related restrictions have been charged with several different types of assault. You might be wondering why this is and more importantly, does this make a difference? The short answer is – yes it does. The differences are discussed below.

There are many different ways assault can be charged. Some common questions we get asked are:

I only pushed this person, can police still charge me with assault?

Yes. To prove an assault there does not need to be an ‘injury’ (although sometimes there is). Generally, it only requires that you apply ‘force’ to someone else. In some instances, assault can also be established where the victim is in fear of the use of force without any physical touching taking place.

Most likely yes. Charges that involve assault such as ‘unlawful assault’ are less serious than other charges such as ‘recklessly cause injury’. However, there are some instances where this might not be the case. For example, if you are charged with assaulting a police officer or a paramedic, these offences tend to carry heavier penalties, and are taken more seriously by the courts.

If you are charged with any type of assault it is important for you to seek legal advice straight away. A lawyer will be able to assist you in figuring out whether the charge is appropriate and also whether there is a possibility what you have been charged with could be reduced. In our experience this can make a big difference to the outcome of your case.

Police have charged me with heaps of different assaults and other charges but they are saying just the one assault has happened, can they do this?

It is quite common for police to charge people with ‘alternative’ charges. This means they will charge you with more than one charge for the same punch or push. Basically, they do this with the idea that the alleged offending will be captured by one of the charges. If this has happened to you it is important you seek legal advice straight away. You will want a lawyer on your side negotiating with police about resolving on the most appropriate charge (or no charge at all!).

Affray is an old offence and has been around for centuries. To prove an affray, the prosecution must show that:

See what we mean about it being an old charge?

In fact, everyone in your group could be charged with affray even though each had a different role. This difference is important and at this point you are probably going to want a lawyer to step in. The difference between a term of imprisonment and a penalty served in the community could be in the detail. By you only ‘threatening violence’ rather than using it, you are likely looking at a much less severe penalty (keeping in mind there are a bunch of things a Magistrate or Judge will need to consider when sentencing you, including whether or not you have a criminal history).

You can see how affray could have been a charge used by police recently during the protests, in light of media reports of brawling and violence being used amongst groups of people.

We hope this has helped you get a better understanding of what an assault or an affray means. Each case will be different and it is sensible to have a lawyer look over your case to ensure you get the best possible outcome.

We deal with assault and affray charges on a daily basis, so are well-placed to handle your case.