The art of argument 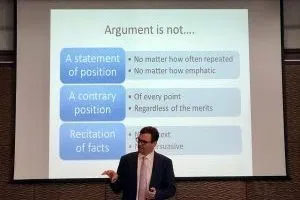 Arguing is part of our daily lives, it is something that quite often happens inadvertently. You are probably arguing right now with the assertion in the previous sentence that everyone argues every day by thinking to yourself “I don’t argue every day”.

Recently over the Easter period, I spent a significant amount of time with my girlfriend’s 3-year-old nephew and there was one word that he constantly repeated…“why?”. It did not matter what had been said to him, his response was always the same and it really made me think about the skills needed to put forward a good argument. It made me realise that, when making any form of statement, the arguer needs to prepared and able to respond if another party asks “why?”.

At the recent Australian Defence Lawyers Alliance Conference in Sydney, our firm was lucky enough to listen to a presentation from highly respected Sydney Barrister, Grant Brady SC about the art of argument. The following summarises the points that Grant made throughout the course of his presentation.

The second limb is that both the arguer and the argument must be credible. The best way to ensure your argument is credible is to follow the ‘why/because’ model. This ensures that any proposition that is put forward is backed up with reasons. Let me give you an example of the why/because model in the context of the criminal law. A lawyer is conducting a summary case conference with the Prosecution and believes that a number of the charges are inappropriate and cannot be made out. Instead of the lawyer simply stating that they wish for the charges to be dropped (as happens far more often than it should), a far better approach is to provide the Prosecutor with a list of reasons as to why the charges against their client should not proceed.

The third limb is that both the arguer and the argument being put forward are empathetic. An arguer is never going to be able to accurately get their point across if they are not empathetic and able to understand the view of the other party. A good argument needs to not only meet the bad points in your case but it also needs to address to good points in the opposition’s arguments. The ability to put forward an empathetic argument is a skill that is very important for any arguer to have as it is far more likely to result in the other party adopting the arguer’s position as opposed to simply butting heads.

Arguing is a skill. A good argument is not something that just happens, a good argument takes thorough preparation and planning. Here at Doogue and George, we have vast experience putting forward good arguments on behalf of our clients and frequently these arguments result in our clients being acquitted of all charges or receiving a much lesser sentence then they otherwise would have. If you are ever in trouble and need an expert arguer to assist you through the court process, get in contact with us here at Doogue + George.