Home » Criminal Law » Thank you for not smoking

Thank you for not smoking 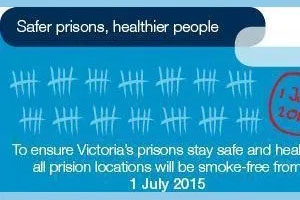 In case you hadn’t heard, a smoking ban has been enforced across 13 Victorian prisons.

I suppose the government thought they’d pop up a few well-placed signs, the so very identifiable red-circle-slash sign signalling to all inmates, no mate, not here.

We’re no strangers to smoking bans. I remember days gone by where people could smoke in clubs, bars and even cafés, relishing the marriage of a beer or coffee and cigarette together, in harmony, not out in the elements. I also recall (woefully) smoking in planes, hospital waiting rooms and dad sparking up in the car, windows up, without a second’s thought.

We’ve come a long way. Primary school-aged kids could not even conceive of such a world (unless you travel abroad; then they’re all “why are all these people smoking?”) and regard those past times with disbelief, as I am sure we all do now.

But the thing is, out here, in the wide world, you can’t smoke here, here and here anymore; but there’s a tiny patch over there. Away from everyone else; go for your lives. You can still smoke. You’re ostracised, likely being judged and possibly audibly tut-tutted, but you can still smoke; to your heart’s content.

The issue, then, of a total ban in prisons, and the impact of this, is what seems to be glossed over. It had been calculated at the time of the introduction of the bill that 85% of inmates smoke. Let’s throw in the mix a heady dose of boredom, apathy, mental health issues. Also, the fact that they’re in prison alone, denotes sticklers for rules they may not be. We already know there remains prolific levels of illicit substances being smuggled into prison, are we adding to the problem by including cigarettes as another contraband item that will be illegally traded?

Yes, we are talking about prison inmates. Yes, they have been sentenced for crimes committed. No, that does not mean they have been stripped of all rights. It has been long-said that if you treat people like animals, they’ll behave that way. I have read the press and been presented the logic behind it and I understand it, but I’m struggling.

We all know. Smoking causes harm. It’s not good for your health. TV ads remind us of fathers who are going to miss out on little Sally’s kinder graduation, children growing up bereft and ruined because of their parent’s selfish habit and I, for one, never looked at a dish sponge the same way after the lung-tar-squeezing ad. But, it’s still legal, they still sell them at supermarkets and the government still turns a whopping sum on the excise.

Smoking does not lead to anti-social behaviours. It is, as we well know, addictive.

So, when you deprive someone of their addiction in an uncontrolled environment with volatile personalities, is it fair to deduce, or at best speculate, that a person may lash out? Multiply that by the actual amount of antsy inmates, with some free time on their hands – does it take a mathematical genius to deduce a recipe for disaster?

They say it takes about 12 weeks for the nicotine receptors in the brain to turn off, so if you were actually willing and keen and on giving it the flick in the first place, after three months, you’d be a new person. That is, however, after the first tough week where you’re going cold turkey against the physical cravings. Best way through this part? Breathe through it. Exercise it out. Each pang shouldn’t last longer than five minutes. You’ll likely feel tense, irritable and on edge. Keep yourself busy, they say. Have a support network around you that is patient and understanding. You’re also going to possibly want to replace one craving with another. So that you don’t gain weight, or supplant one unhealthy addiction with that of, say, sugar (remember folks, we’re giving up smoking for health reasons) eat some low-calorie healthy snacks. Obviously, available in the prison fruit bowls we see scattered all over the place. And lastly, you might get a bit bound. You know, the old irrigation might slow up a bit. Don’t worry. A diet rich in fibre, whole grains, fruits and vegetables should keep you from seizing up.

Now, if the prisoners carefully considered the benefits of protesting or rioting against the change, there is a great probability they could gain an addition to the time they are in custody by 12 months plus. Meaning, obviously, they will be kept from smoking for a prolonged period.

So what I’m saying, I guess, is that the riots at Ravenhall were somewhat irrational, ill-conceived, ill-fated and completely and utterly in vain. But, the same could be said about enforcing a complete and total ban on smoking in prison.