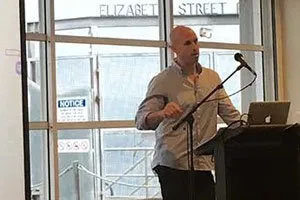 As part of the ADLA conference, we were presented with a case study by Josh Taaffe & Cameron Browne. The matter in question concerned a client who was represented by both firms in their respective states. Our connection to Potts Lawyers through ADLA allowed us to not only refer the case to our QLD partners, but recommend their expertise in this area and also work together for the client. The case case study proceeded in two separate but connected parts.

This interesting foray into synthetics gave us much to consider. I have included Josh’s segment of the presentation which explores what the client was actually charged with.

The client was a 30 year old businessman who, following the execution of a warrant on his hotel room in 2012, was charged with trafficking in a commercial quantity of a drug of dependence which has a maximum penalty of 25 years imprisonment.

What Police located at the execution of the warrant at the hotel room was a small amount of cocaine. A further warrant was executed at our client’s business premises. Located there was 100kgs of white and off white powders as well as plant material. The Police valued this bust at $1.5 million dollars.

As a result, the client was remanded into custody following a police interview. The drug of dependence that he was charged with was synthetic cannabinoid and the Police alleged that this was a Schedule 11 drug of dependence in accordance with the Drugs Poisons and Controlled Substances Act 1981 (Vic). Based on this information, he was advised that if the Prosecution could prove that the substance was a drug of dependence he would be looking at many years of gaol.

The client instructed that he had not done anything illegal where the 100kgs of white powder or plant material were concerned and that all products sold by his business were legal. As such our lawyers began working on his defence and at all times told Police and Prosecution “this substance is not what you say that it is”.

First things first, the legislation was checked. Lo and behold, there was no reference to synthetic cannabinoid or anything like it. At this stage, we had obtained an image of the molecular structure of the substance and the chemical name. The substance found by the Police was completely different to those in the schedule.

However, that was not the case. The client was in fact making himself aware of the legislative changes to ensure he would not be breaking the law. At all times, and by all accounts, he was doing what he could to stay within the parameters of the law and to ensure his conduct and that of his company was lawful.

Based on the fact that we could not see a disclosable offence in what the client had been charged with, an application for bail proceeded. Bail was granted with a surety in the amount of $100,000. This was paid and he was ultimately released from gaol.

We then press the Prosecution and the Police for results on testing of the substances. After two months of being on bail, the Police advise that yes there was a small amount of cocaine which was located in the hotel room and tested positive as such but most importantly, the 100kgs of white powder was analysed and there was no drug of dependence found. The testing returned as negative.

By this stage, our office is yet to receive a brief. The Prosecution made applications to withdraw the trafficking charge against our client, however advise that there was one 30 gram packet that they still believed was a drug of dependence.

The Court wanted to deal with the matter summarily, but we refused as the client was adamant he had done no wrong. The matter was adjourned for a contested committal which would ultimately lead to a trial by jury.

At court appearance number 3, our office had still not had any contact from the Police nor the Prosecution about testing being conducted prior to the contested committal. The Prosecutor had formed the view that the evidence the Police had, so far, was not conclusive enough for a finding of guilt by a Magistrate in relation to the synthetic cannabinoid possession charge (the 30 grams).

We discussed with the Prosecution the possibility of a diversion being offered in relation to the possession of the small quantity of cannabis on the basis that the synthetic cannabinoid charge would be withdrawn. The Prosecutor was supportive of this position and the matter was adjourned for a Diversion Hearing.

By the fourth court appearance, all paperwork had been completed and our client was interviewed for suitability for the Diversion Program. The Diversion was granted with a condition that the client make a charitable donation and provide a letter of gratitude to the Police for their co-operation with the diversion recommendation.

The conditions were complied with and our client’s single charge was ultimately dismissed. He remained with a clean record. His surety and his property, being 98kgs of white powder, were returned to him from police property.

In conclusion, putting the Prosecution to their proof along with the diligence and knowledge of the law of our solicitors resulted in a complete withdrawal of charges.

3 main bases to defend these cases: