Peter Hollingworth and the Royal Commission 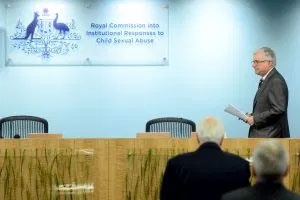 Now that the Royal commission has tabled its reports in Parliament, I feel compelled to voice my opinion about how Peter Hollingworth was treated. It is not my normal practice to do this or to write about former clients and their experiences. However, there are some reflections on this matter that may, hopefully, assist people in the future.

I had the pleasure of acting for the former Governor General of the Commonwealth, Peter Hollingworth, during the Royal commission hearings last year.

Our firm did not act for him when there was an enquiry in Brisbane in 2002.

Peter Hollingworth is an exceptionally decent man who has given service to the community for almost the whole of his adult life. He is an extremely kind and thoughtful person who reflects deeply on how he should approach matters. I am particularly aware of this because there were a number of issues that we, as lawyers, wanted to cross-examine on, but were held back by his instructions.

I felt that he was extremely hard done by in the process of the Royal Commission and savaged by the media in circumstances that did not warrant it.

What I propose to relate in this piece is just two examples of how I believe the narrative has been co-opted against him and also one reflection on how the Royal Commission obtains evidence from witnesses.

To be clear from the start, there ne ver was any allegation that Dr Hollingworth had perpetrated any abuse himself. The assertion was that he had shown errors of judgement in the way he had dealt with things, once he became aware of them.

John Elliott was the Rector of Dalby. He and Dr Hollingworth had had little to no contact when, in 1993, Bishop Noble asked Dr Hollingworth to deal with an historic allegation of sexual assault as he was too close to the family.

Dr Hollingworth was told that there was an allegation of sexual assault against John Elliot long before he had been priested. He immediately confronted Elliott and got an admission from him of his wrongdoing in this matter. To interpose at this point, I note that in all my years I have not heard of a matter involving a priest where a more senior colleague persuaded him to confess in this way.

Dr Hollingworth directed Elliot to go to see the family of the abused man, make confession and apologise.  This is what Elliot then did. He went and confessed to the family, though it now appears he tried to minimise the harm he had done.

The victim was, at this stage, around 25 years old so there was no impediment to his reporting the matter to the Police. At this point in time, the victim and his family could have gone to the Police who would have charged him, leading to his being removed from his parish and prevented from exercising priestly ministry again.  They had his admission of guilt and it was completely within their control as to what action they might take. In fact the victim chose to make a civil claim for compensation from the Diocese and chose not to go to the Police.

Again, I note that I have never heard of circumstances where a senior priest has gotten a priest to confess personally to a family, thereby placing himself at the mercy of the family and the victim.

Given that in 1993 the Diocese of Brisbane had not as yet developed its protocols for dealing with sexual assault allegations, I personally think that this was an appropriate  response when set beside other disciplinary measures by the Archbishop.

If the victim or their family did not want to go to the Police then, at that time, would it have been appropriate for Dr Hollingworth to do so?  The short answer is no.  He was not required to do so under Queensland law.  He investigated the matter immediately putting strict conditions on Elliot’s continuance in light of the fact that there was no evidence of his ever reoffending since his ordination in 1987.  Given that these measures left it open to the victim to decide whether he wished to report the matter to the police, personally speaking, I think that I would have handled it no differently.

From my perspective Dr Hollingworth is a man of faith and principle who followed Christian teaching on repentance, forgiveness and redemption being demonstrated by good works.  This is what underpinned his decision to let Elliot continue in his parish until retirement under his direction and discipline.

I am aware that now that he has researched the nature of paedophilia more extensively, Dr Hollingworth accepts that allowing Elliott to exercise his priestly ministry was a serious error of judgement, especially because the victim and his family did not accept his decision.  This is what he himself publicly acknowledged to the victim at the Royal Commission Case Study 36 in Hobart.

It is clear in speaking to him that his subsequent research study was not undertaken lightly and nor was it to seek to appease his critics.  After he ceased to be the Governor General in 2003, Dr Hollingworth read widely on the topic and consulted people who had been sexually abused and experts in the field to better understand the nature and causes of paedophilia a psycho sexual disorder.

But to me, the subsequent apologies made by him do not cancel out the manner in which he dealt with the original complaint. The victim and the victim’s family were empowered to have Elliott charged and chose not to do so.

Put yourself in Dr Hollingworth’s position and ask yourself what you would have done?

Kevin Lynch was a paedophile who was at Brisbane Grammar School, an independent school, and subsequently at St Pauls Anglican School Bald Hills.  It is now known that he abused dozens of boys.  Kevin Lynch hung himself hours after he was charged by the police in early 1998.

The injury to the victims was compounded by a memorial service that was held in the school chapel where the school community remembered and paid their respects to Lynch.

No mention was made of the pending charges against Lynch.

Prior to his suicide, Dr Hollingworth did not know Lynch, had nothing to do with him and had no reason why he would know of him. Prior to the Brisbane Royal Commission Case Study 34, he saw a photo of him in a newspaper cutting which also rang no bells for him.

Dr Hollingworth did not attend the service in the school chapel as he was not in Queensland at the time and would not have done so in any case, as there was no connection between him and Lynch.

Allegations of this kind were handled by School Principal Mr Gilbert Case; such issues were autonomously handled by himself and the School Council.

The previous Diocesan enquiry into this matter in 2002 found that Dr Hollingworth played no part in the handling of the sexual abuse allegations against Lynch.  In practise the school was customarily administered autonomously in this way without direct reference to the Archbishop. Dr Hollingworth only became aware of allegations after Lynch’s suicide and had no specific knowledge of any particular complaint.

Subsequent compensation claims were handled by the General Manager and the solicitors for the diocese and mediated by Justice Tony Fitzgerald.

Dr Hollingworth, in a truthful answer to a question by Counsel Assisting the Royal Commission, conceded that he might’ve been told generally of the complaints but had no recollection of that happening.

His answer has somehow morphed into the finding that he actually had positive knowledge.

I note, by way of example, that when apologising to one of the students, a letter sent to them and their families said “our entire community including Bishop John Noble and Mr Case share the sorrow of the events that have occurred.”

There was never any mention of Dr Hollingworth being involved at this point in time.

How all of this has become a finding that he had had actual knowledge prior to Lynch’s death of the allegations is, frankly, beyond me.

Which leads me to the issue that I want to raise about Royal Commissions and the way they take evidence in relation to historic matters.

What seems to have happened, on a number of occasions, was that a person is pressed to admit that they did not have a recollection of a meeting or a document. It would then be put to them that if they did not have a recollection that they could not deny knowledge of a meeting or document under examination. Honest witnesses will always concede that 20 years later they might not remember a conversation or having seen a particular document.  Any concession of that type unfortunately can mean that the position of a witness was undermined.  But the same rigour never seemed to be applied to the sources of allegations. That line of questioning was conducted often by the Commissioners themselves but mostly by Counsel Assisting.

As a person who goes to Court regularly and hears evidence, I personally was dismayed that this was then used as the basis of findings.

And also dismayed to see a good man getting attacked through the media, more for his position than the facts of the incidents involved.