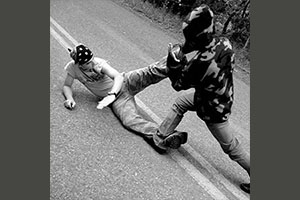 If there have ever been greater weasel words in the Mandatory Sentencing debate then I would like to see them.

The SAC were expressly not permitted to evaluate the merit of the proposal. This undermined their crucial role in this process and left them forced to produce a report which proposes the best way to introduce mandatory sentencing.

The reason why the SAC were not allowed to assess the merits is clear, it is considered to be a rubbish idea by all the stakeholders. The current Director of Public Prosecutions spoke out against it when he was Chairman of the Criminal Bar Association. Judges are privately pouring scorn on the proposal as a fetter on their sentencing. Defence lawyers see it for the tragedy that it is.

The attempt to dress this up as a Sentencing Council initiative shows how bad it really is.

Two new offences are being introduced; intentionally and recklessly causing severe injury, which would attract the statutory minimum sentence;

The new release says they would apply those offences to circumstances where the offender:

It is understood that the definition of severe injury would cover:

The difficulty with these parameters is that they are so variable. Just as a few bruises and a small cut can be serious injury so too, a long-term serious disfigurement may be a small scar on the face or some other part of the body. What may appear to be long-term serious impairment at the time of sentencing may not remain so.  If these impairments can be psychological then it will capture a lot more.

This again leaves us in a position where the Prosecution and Police will decide if someone should face a charge that carries a mandatory sentence. They will use it as a bargaining tool as is currently the case with the assault causing serious injury charges.

We are working on an appeal for a new client who could have pleaded to recklessly causing injury and escaped gaol. He took it to trial and a charge of intentionally causing injury was added.

He was found guilty and went to gaol.

Why are new offences being created?

This was done by the Government to try to limit the effect of this legislation. If they had run it on the old offences of recklessly causing serious injury and intentionally causing serious injury there would have been huge problems in the Courts and legal system.  There would have been so many people captured by the offences they would not have been able to build the prisons fast enough.

Why are the new offences a problem?

Just this week we had a client who was charged with driving with a suspended licence. She has never committed any other criminal offences. On one charge she faced for driving suspended she was placed on a suspended sentence.

That means on the new charge of driving suspended she would have to show exceptional circumstances not to go to prison.

She works, has a supportive family and is basically an upstanding citizen.

The Judge, rightly at law, says “no” you have to go to prison.

Exceptional circumstances are “exceptional”. Think about it

Who is it going to capture?

As they say the chains of tyranny are forged one by one by those who are destined to wear them. The public who think “it sounds like a good idea” will be horrified when their own son, captured by the trappings of youth, poor judgement and inexperience, is looking down the barrel of a 4 year mandatory sentence for a fight at a train station.

And let’s be clear their boy might have been at the train station with friends and not actually have hit the victim. They could still be charged with acting in concert and end up with a mandatory sentence of four years.

Especially if they are a naive young person who does not realize that they should not make a statement to the Police because the Police will be trying to get them to admit that they thought it was “probable” and that they “sorta knew it was going to happen”. Or, in answer to the question of whether they caused the injury, “maybe, it could have been me”.

Remember that pre-planning at law and acting in concert  can be measured in seconds not necessarily minutes
Many of the offences that we see that would easily fall inside this are assaults by groups of young people at train stations or on trains. It is often hard to know who did what as there are many involved. Often the person who the co-accused says was the main offender gets off with lesser charges because the victims make undetermined claims as to who was actually hitting them.

Normally, there are one or two extremely violent characters and then hangers-on who end up participating but not in a major way. Why should Judges not be able to draw these distinctions still?

SAC estimates there will be 200 new prisoners under the proposed mandatory sentencing.

No one says that prison rehabilitates people. So what are we achieving?

We are really just fulfilling the populist agenda of the Government.