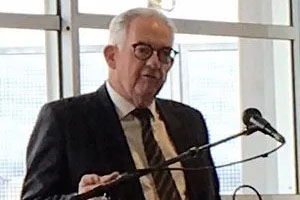 Justice Stephen Estcourt began his ADLA conference presentation with the observation that jury trials in Australia seem to be getting longer, with the prosecution seeming to want to prove each fact twice over.

Appointed to the Tasmanian Supreme Court in 2013, Justice Estcourt has a wealth of experience when it comes to jury trials.  He was called to the Bar in 1970, taking silk in 1998.  He has held the roles of Deputy President of the Commonwealth Administrative Appeals Tribunal and Chair of the Australian Bar Association.

It should be noted that Justice Estcourt’s interest stem beyond the law, his food blog ‘Reminiscence of a food tragic’ is well worth a look for any food aficionados out there.

Justice Estcourt gave us the following food for thought in relation to managing long jury trials.

His Honour cautioned that during long trials, the behaviour of barristers is magnified and certain traits may become off- putting to a jury.  For example, counsel should consider whether their style is too soft or too aggressive and try and modify accordingly.

Neutral advocacy, according to his Honour, in long trials is often the best answer.

Be effective but not annoying!

Don’t underestimate the jury, try to keep them onside. Cheap point scoring and grandiose statements are not advisable.

Co-operation between Counsel is especially important in a long trial.  Jurors do not like constantly having to return to the jury room while counsel argues a point in their absence. Counsel should consider whether the point could be discussed in a break in proceedings and only object where appropriate.

Justice Estcourt advised that the trial judge in a long jury trial should also make the effort to involve counsel as much as possible.  Justice Estcourt spoke about his experience recently presiding over a 5-month trial. In that instance his Honour provided his summary of evidence to counsel in advance of his charge to the jury – allowing counsel to suggest any additions in advance or point out issues that might need greater focus.

Counsel and instructing solicitors should maintain control over their material. In a long trial transcript can run into thousands of pages.  His Honour suggested condensing and summarizing the material each day. This will highlight the key issues from the day’s transcript and also save time at the end of the trial.

Managing the client can be as important as managing the material – the appearance and demeanor of the accused can take on additional significance in a long trial.  Ensure the client looks ‘neutral’.