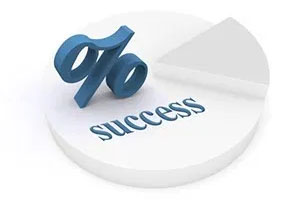 As a law firm who handle a large number of criminal jury trials, we have taken the time to reflect on what we do well and what we can improve.

The starting point is to look at our statistics in criminal jury trials from last year.

It is always instructive to review which jury trials you have won and why you won them. As it is interesting to see what, in hindsight, you may have done differently on the trials that were not successful.

What principles form the basis for our statistics on winning jury trials?

First of all, the trials must have made it to day one of the trial, at least. If the case settled before that first day, it was not included in our research.

A “discontinuance” formerly referred to as a “nolle prosequi” has been counted if preparation was underway and we proceeded to the first day before the Prosecutors gave up.

There were a further 5 discontinuances in our tally that are not included in the statistics. These are cases where Prosecutors were always likely to concede once the first of multiple trials for the accused were lost. Including them would enhance our figures significantly, but that is not really the point of this exercise. Besides, as you read on you will garner, our statistics are pretty great nonetheless.

A” hung jury” is when a trial is heard, but the jury cannot reach a decision and so the trial is adjourned off to be heard again. A hung jury is generally a positive outcome for the defence as the prosecution witnesses are on transcript proving it much harder for them to shift their evidence and affect any harm to your client.

How many jury trials did we win?

Out of 20 Jury trials listed:

Which can be expressed as:

We could delve further into some complex statistics about retrials, then having an 80% chance of not being found guilty and that affecting the statistics but this is not a maths project. Feel free to explore those figures for yourself.

What these statistics demonstrate, in part, is that the prosecution will run matters to the door of the Court because they assume/think/hope that the accused will plead guilty at the last minute.

How many days spent in Court on jury trials?

We were in Court in 2012 for at least 250 actual criminal jury trial sitting days. Obviously, at some stages, we had concurrent jury trials running in the Courts.

How long is a jury trial?

What surprised us was the amount of time involved in the trials. From commencement, that is, from the start at filing hearings in the Magistrates Court, 5 of the 20 matters had over 30 days in Court time (one other had 27 days).

These figures are both of interest and use when discussing with clients the perennial question of how much a case might cost. It also helps us determine what internal resources to allocate to a trial.

At the trials, we had an instructing solicitor at Court every day with the exception of a couple of legal aid trials where there was nothing for them to do; therefore it was not necessary for them to be present every day.  The trials resulting in discontinuances can be credited to the Solicitors having properly prepared the matters and having identified the flaws in the case.

Most of our 2012 trials were run by Barristers with an instructor. Only two were run by in-house Counsel. Where we had Counsel of choice (i.e. one specifically chosen by us for that particular case) we had a higher win rate.
The trials that proved the hardest and most demanding on client and lawyers were those where we were advised by Barristers at the last minute that they were jammed in something else.  Interestingly, those trials where Barristers got caught were all legal aid trials, where they were not being paid much. We have talked about that dumping process in another blog so we will not agitate that topic again here.

What did we take from this?

We, as a firm, are adept at identifying cases where there is a genuine defence. This is because we have vast experience in jury trials and we also enlist a collaborative approach when working on and discussing potential trials. It is a collective experience that results in sound decisions for our clients.

Three of the four trials that were unsuccessful, were cases where we had little doubt we would lose but acted upon our clients’ instructions of proceeding with a plea of not guilty and (even aware of the discounts for pleas of guilty) they resolved to push on.

In cases where most was spent on preparation, all resulted in not guilty findings. And, this makes pure common sense. Where you have a plausible defence, an arguable case and a client willing to work hard, you are more likely to win.

We place an enormous amount of emphasis on preparation for jury trials.

Recently, we conducted a seminar for every lawyer in our firm concentrating on sex offences trials.  It included drilling down to fine points such as:

It is our view that training is as important in “how to run a trial” as it is in “how to do a plea” or “how to cross-examine”.

Training and preparation are where cases are won.
I always tell a client at the first interview, “We will do everything that we need to do to prepare for a trial. At the end of a trial I do not want you to feel that any stone was unturned or that I didn’t get this document or call that witness. ” If you prepare and present a jury trial as fully as possible, the outcome will be successful more often than not.

To be precise, using our statistics, 70% will be found not guilty and 10% will get to have another go at it.