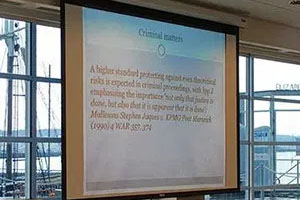 On 18 March 2016 I heard Rob Franklin, Managing Director of Potts Lawyers, give a lecture on ethics as part of the 2016 ADLA conference. In addition to being Managing Director at Potts Lawyers, Rob serves on the Queensland Law Society Ethics Committee (he was a former Chair of that committee) and provides advice to lawyers being investigated by the Queensland Legal Services Commission.

While acknowledging the importance of having a good knowledge of the Conduct Rules, rather than covering those rules in great detail, Rob stressed the importance of approaching our ethical obligations as lawyers with the correct mindset. Ethical lawyers aspire to more than simply not being unethical lawyers. Rob cited a statement made by former Chief Justice of the High Court of Australia, Sir Gerard Brennan,

“if ethics were reduced to rules, a spiritless compliance would soon be replaced by skillful evasion.”

Besides reducing the possibility of falling foul of the rules, this approach limits the prospect, and attendant stress and anxiety, of even being investigated by the Legal Services Commissioner to begin with.

Rob also saw this value rather than rule based approach to ethics as needing to be encouraged by law firms as a whole, “everyone carries the can.” His firm encourages all employees to have an ethics consciousness. Despite being a Queenslander, Rob also emphasised the need for law firms to have a system for approaching ethical issues. Rob says ethical issues should be discussed with as many people as possible and, at Potts Lawyers, lawyers must confer with at least one Director. Not only can law firms, in certain situations, also be liable for the misconduct of their lawyers, but law firms will also inevitably suffer damage to their brand if one of their lawyers is found guilty of misconduct.

With developing a system in mind, the Law Institute of Victoria provides some excellent resources on their website and suggests the following method to resolving ethical dilemmas:

Rob also drew particular attention to practitioners’ obligations to know where money deposited into trust is coming from. Money laundering is a particular focus of authorities at present and, in addition to the obligations under the Legal Profession Uniform General Rules 2015, it is important to have regard to the Anti-Money Laundering and Counter Terrorism Financing Act 2006 (Cth) (“AMLCTF Act”) and Division 400 of the Criminal Code Act 1995 (Cth) which specifically cover money laundering. While lawyers are not considered ‘reporting entities’ under the AMLCTF Act, which at present is largely directed at the financial services and gambling sectors, and bullion dealers, lawyers are still subject to some obligations, particularly in relation to ‘significant cash transactions’. It is also worth noting that the Financial Action Task Force, an international body designed to develop measures to combat money laundering, and of which Australia is a member, has recently reiterated its position that lawyers should be fully regulated as ‘reporting entities’ under the AMLCTF Act, something the Law Council of Australia currently opposes on the bases that the existing regulatory framework is sufficient, that there has been no critically assessed evidence suggesting a ‘regulatory gap’ in relation to lawyers, and that no cost benefit analysis has been undertaken.