The article Contested family violence intervention orders and children is written by Kate Da Costa, Senior Associate, Doogue + George Defence Lawyers. Kate is one of our senior associates and is part of our Sunshine team. She regularly represents clients at the Sunshine Magistrates’ Court for various criminal legal issues.
Admitted to legal practice in 2002, Kate has since been working exclusively in the field of criminal law. She has experience in all Victorian criminal law jurisdictions including in the High Court of Australia. 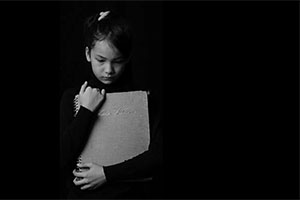 Where there has been a marriage or partnership breakdown, children are often central to Family Violence Intervention Order Applications. Being a witness in Court can be intimidating and confusing for many people, and of course this is particularly so for children. Children and young people have varying cognitive and comprehension abilities which can be affected by many factors, including their age, schooling and intellectual ability. For this reason, there are special protections in place for child witnesses in all jurisdictions in Victoria. The Family Violence Protection Act 2008 (the Act) is no exception.

Whether you are an Applicant or a Respondent to a contested Family Violence Intervention Order Application, it is important that you obtain legal advice from an experienced practitioner to ensure that you understand your rights, and your options with respect to your children’s involvement in the process.

My children are aged 12, 10 and 9. They have seen the way my husband treats me. Can I call them as witnesses to support me?

Section 67 of the Act provides that a child who is not an Applicant or Respondent to a Family Violence Intervention Order must not give evidence unless the Court grants leave to do so.

In deciding whether to grant leave, the Court must consider ‘(a) the desirability of protecting children from unnecessary exposure to the Court system; and (b) the harm that could occur to the child and to family relationships if the child gives evidence’.

In our experience, the reality is that it is seldom considered wise to seek leave to call a child witness, as an Applicant or Respondent’s case rarely benefits from causing apparent stress to a child appearing as a witness before the Court. An experienced lawyer will discuss with you how to best prepare your matter for Contested Hearing.

My son told me that my partner hit him. He is only 7 years old and I don’t want him to have to come to Court. Can I give evidence to the Court about what my son told me?

In criminal law proceedings, there are complex rules of evidence, and whether a particular piece of evidence should be allowed in contested proceedings is often the cause of lengthy legal argument. However, Section 65 of the Act provides that the Court ‘… may inform itself in any way it thinks fit, despite any rules of evidence to the contrary.’ In effect, this means that evidence that may be excluded in a criminal matter, can be admissible before the Court in a Family Violence Intervention Order Contested Hearing.

A parent Applicant can give hearsay evidence on behalf of their child at a Family Violence Intervention Order Contested Hearing. This means that an Applicant can give evidence about what they understand has occurred between the child and the Respondent. The evidence will be assessed by the Presiding Magistrate on the balance of probabilities. In preparing your case for contest, your lawyer will discuss each step of the proceedings with you, including your giving of evidence.

My child is 13 and wants to come to Court to watch proceedings. Is that ok?

It is never appropriate to have a child as a spectator in Court proceedings. This is particularly so when the parties to the proceedings are the child’s parents in conflict. In any case, section 150 of the Act restricts the presence of children in the Courtroom during proceedings.

I don’t want to see my ex, but I am happy for the children to see him. The Court has listed them on my Application. Is there anything I can do about that?

Children must be listed as Protected Persons on an Intervention Order if they have been affected by family violence. This includes being an eye witness, or being present when the alleged violence occurred or being exposed to family violence after it has occurred, such as seeing a parent’s injuries or damaged property from family violence.
Even in cases where an Applicant does not report the children’s involvement in any alleged family violence, a Magistrate must ask if the children have witnessed it, or been present when the alleged violence occurred. Having made those enquiries, a Magistrate can list children on an Application or Order even where the Applicant does not seek it.

In addition, in circumstances where the Court ultimately does not grant a Final Order in relation to an Applicant, the Court has the power to make a Final Order for a child alone as a Protected Person, if satisfied on the balance of probabilities that the Respondent has committed family violence against the child and is likely to do so again.
If you are an Applicant or Respondent and your children are listed on an Application or Order, you should seek legal advice about what this means for long term custody and access arrangements.

My partner has made up false allegations against me to try to stop me my seeing my children. She is telling the children lies about me and coaching them to say bad things about me. Can I use reports about the children from the family law proceedings that support me?

Parents with the children in their care might be considered to have an advantage in terms of the weight the Court gives their evidence when considering whether family violence has occurred.

To counter such evidence, the Respondent may seek to rely on reports about the welfare of the children prepared in the family law jurisdiction. Due to statutory provisions however, this is not always possible. Leave must be sought from the Federal Circuit Court or Family Court for such a document/s to be used beyond the Court proceedings for which they were intended.

You must seek advice from your lawyer about what documents can and cannot be used from other related proceedings.

There are Court Orders from the Family Court saying I can see the kids. Now I’m being told that I can’t because of my ex’s IVO against me. Is that right?

In most cases, a Family Violence Intervention Order will still allow a Respondent to do anything permitted by a Family Law Act Order, however this is not always the case.

In determining an Intervention Order Application the Court does have the power to suspend or cancel Family Law Act Orders made by the Federal Circuit Court or the Family Law Court with respect to custody and access of children. This means that the Respondent will not be allowed to spend time with the children as set out in the Parenting Order until the Intervention Order has been varied or the condition has expired.

You should seek legal advice immediately if your Family Law Act Orders have been suspended by Intervention Order proceedings.

A final Family Violence Intervention Order can have far reaching consequences for both Applicants and Respondents. It is vital that legal advice is sought at the earliest opportunity so that you understand your rights, and your options with respect to your childrens’ involvement in the process. Engaging legal representation at the earliest possible stage ensures that those matters that proceed to Contested Hearing are thoroughly prepared, and that you are guided through the process with professional advice with respect to every aspect of their matter.