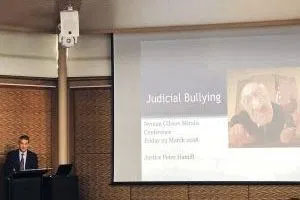 Each year ADLA hold a conference to share resources and knowledge specific to the practice of criminal law. This year, our hosts Nyman Gibson Miralis invited our firm along with member firms, one from each state and territory in Australia, to Sydney to engage with speakers covering a range of informative topics.

Without taking away too much from the other speakers, the star of the show was definitely his Honour Justice Peter Hamil of the New South Wales Supreme Court. His Honour presented on a topic that unfortunately is something that all criminal solicitors and barristers can relate to – judicial bullying.

Justice Hamill used humour and anecdotes (some personal) to spruik his message, which was simply to maintain composure and not get swept up in the emotion. His Honour used an example of a Sydney barrister who simply smiled whilst knocking back criticisms from a judge who disagreed with her submissions, which gives real meaning to the old adage, “a smile goes a long way”.

His Honour reminded us, that as criminal advocates sometimes we have to put our armour on and muster the courage to ask the bench with aplomb to excuse themself if they go too far. As uncomfortable as this is, we must remind ourselves that we must do what is necessary to protect our client’s interests. His Honour cited a passage from a transcript of a matter where such an application was made. The defence barrister in that case eloquently said – ‘it is a difficult application to make and I hate to make it. It is an application that I make as a last resort’. This extract from the transcript exemplifies that a combative tone is not your only resort in these situations and that poise is paramount.

For me, personally, as a junior practitioner, the most salient thing to take away from his Honour’s talk was that, albeit unpleasant, dealing with the fury of an annoyed Magistrate/Judge is part and parcel with our role as advocates. Also, it is important that we support other practitioners who we witness being criticised by the bench.
His Honour reminisced about his own time as a barrister when a judge he appeared before began strumming his fingers in frustration as Justice Hamill and the prosecutor scrambled to re-draft a set of agreed facts.
So, for practitioners reading this, just remember the next time you annoy the bench take a deep breath and think to yourself, “Hey, this may be the first step to my appointment as a Justice of the Supreme Court”.

All in all, a great way to conclude the ADLA presentations.