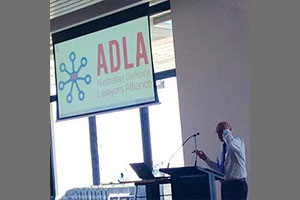 His areas of expertise include criminal defence, corporate corruption and compliance, inquests and enquiries, professional tribunals and human rights.  He has practiced exclusively in the field of criminal defence work and ancillary human rights law since 1997.  Paul Higham recently spoke at our ADLA conference about how you can protect your client who has been called as a witness in a commission or enquiry and the effect of the most recent cases on the powers of commissions.

“What is a fair trial?”, Paul Higham asked. Human rights are not infused in our criminal procedure.  Delay, for example, on its own will never be enough to stop a trial or enable courts to intervene.  Only at the point of irremediable defect will the Courts step in to prevent a miscarriage of justice.

We contrast Australian law with that of the UK.  In the UK, Courts are required to intervene in order to prevent miscarriages of justice.  An overarching sense of fairness is applied. The courts will not give forbearance to instances where a miscarriage of justice might occur such as in the case of R v Grant in 2006.

Comparatively, Australia does not abide with the same ethos as the UK, based on an adherence to the separation of powers. There is, within commissions, an exercise of compulsory power similar to the 15th to 17th century Star Chamber and its unjust application of due process.

The anti-corruption commissions are empowered to conduct compulsory examinations to aid their investigations. A person who is summoned by a commission as a witness must answer the questions asked or provide any required document or thing.

The commissions are able to abrogate the privilege against self-incrimination, albeit this power is usually balanced by the fact that answers given, or documents or things produced, cannot be used in evidence against the person in other judicial proceedings, subject to some exceptions. However, in many instances, witnesses have no rights, Paul Higham says this is a problem that needs to be addressed.

Investigation exists in largely the same realm.  The rules of investigation cannot be set by the executive and they cannot be controlled.

So how can we protect our clients as witnesses?

Immunity Certificates are available in the Victorian Coroners Court where are witness is compelled to give evidence that may be self-incriminatory.  The Certificate deems that the evidence given cannot be used against that witness in judicial proceedings.

There are four important cases:-

A person charged with an indictable Commonwealth offence cannot be required to answer questions before his or her trial about the subject matter of the offence.

The High Court quashed the appellants’ convictions and ordered that a new trial be had, on the basis that there had been a miscarriage of justice, by reason of the prosecution’s possession and possible use of the appellants’ evidence given before the Commission.

The Court found that the interests of justice were not served by requiring the second respondent to defend the forfeiture proceedings or pursue the exclusion proceedings before his criminal proceedings were finalised.
Some considerations:-

These four cases have raised the public policy in this area and it continues to develop.  Paul Higham argues that these cases have acted to constrain derivative use.  We have a duty to protect processes.  It is in the public policy.  They will inform forensic choices in commissions and in seeking to stop prosecutions that ensue.