Home » Criminal Law » 10 rules lawyers should follow in Court, which should be obvious, but apparently aren’t

10 rules lawyers should follow in Court, which should be obvious, but apparently aren’t

The article 10 rules lawyers should follow in Court, which should be obvious, but apparently aren’t is written by Bill Doogue, Partner, Doogue + George Defence Lawyers. Bill has over 30 years experience as a defence Lawyer and has also been an Accredited Criminal Law Specialist for over 20 years. He was awarded a Law Institute of Victoria Service Award in 2013. Bill experience includes jury trials in the County and Supreme Courts for serious indictable matters and has appeared for high ranking church officials at a number of Royal Commission hearings, appeared for and advised both current and former Liberal and Labour Politicians from both State and Federal parliaments. 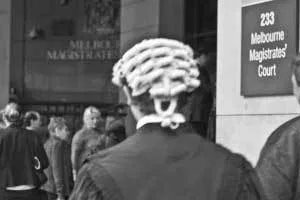 I know there are many items I may have missed in this list, but the following is the top 10 things that irritate me regarding Court behaviour.  Call it advocacy, call it Court-craft, call it just plain politeness.

None of these rules are new, nor groundbreaking, but in going to Court these days, much of it often seems to have been forgotten; except by grumpy old people like myself.

1. Bow your head when you enter

Bow your head out of respect when you go in or out of Court. You are signifying respect for the Court, its processes and what sits behind it. As an aside, I get it when Muslim extremists won’t stand for the Judge. They are right that they are being to ask to bow to something more than the Magistrate or Judge.  It demeans Judges to argue with them about that.

2. No talking in Court

You may be sitting in there all day waiting for your matter to be heard, but don’t start whispering to your friends who are also there. Courts often have surprising acoustics and what you say can be heard. But mainly,  don’t because it is just never appropriate. If you want to have a chat, go outside for 10 minutes and then come back. While you may be bored, Court is a place where the course of people’s lives is often being determined. Also, the Magistrate has to concentrate and your yabbering does not help.

A lawyer’s job is not to pull faces or slam their pen down. Nor to shake their head when people are giving evidence. There is either a Magistrate/Judge or a jury who are making the decision on the facts. Don’t insult them with such a feeble way of trying to influence their decision. Tell your clients not to shake their heads and mutter about other peoples behaviour before their case. No one likes a hypocrite who condemns other’s behaviour but then has acted in some terrible way themselves.

4. Don’t move around when witnesses are being sworn in to give evidence

The swearing in of a witness is a very important part in any case. The person is promising to tell the truth. While many people don’t seem to understand the concept of telling the truth the solemnity and importance of that process should not be interfered with. Stop what you are doing (i.e. reading etc.) and watch the witness swear the oath. If you enter a Court room and someone is being sworn in, then stop at the doorway and watch them until it is finished.

Guys wear suits so the boundaries are easier for them. Don’t wear a suit or tie that you would not wear to a formal social event. Think more funeral than buck’s party. If you have long raincoat or duffel coat, take that off before you enter the Court room. Female lawyers need to dress appropriately for an extremely serious and formal environment. You are not going to the pub.

6. On a plea, give the Prosecutor the documents you will hand up in advance of your hearing.

It saves time and makes you look more organised. The Prosecutor in a summary Court is often just sitting there twiddling their thumbs and they will have plenty of time to read them.

An extension is to go and ask the Clerk before the case whether the Magistrate would like a copy of long documents before the matter is called. If they do they do, if they don’t they don’t.

7. Get to Court early and be prepared to wait

I often think being a criminal lawyer is the best training for sitting around in airports. Overcrowded, often  with stressed people surrounding you and nothing to do. That’s life, folks.  Don’t go up and sulk to the Clerk. They have to be there for the whole day as does the Magistrate.

8. Stand when the Magistrate or Judge comes into or leaves the Court.

Pretty obvious, this one, but has one extension. Just because they have stood up to leave does not mean you can start talking loudly. Stay stationary and wait till they have left the Court and the door has closed. Again, it is about respect for the institution.

9. Turn your phone off

A bit more modern, but make sure you check. If you have to leave it on silent be careful and discreet. Phones vibrating on the bar table is a bad look.  I was in Court where a witness being cross-examined tried to answer his phone (unsurprisingly, in one sense; it was a drug trafficking case).

Young children shouldn’t be brought into Court, especially when they belong to an accused. They don’t need to be there and Magistrates hate it. It is so obviously manipulative, that you will always get your client a worse result.