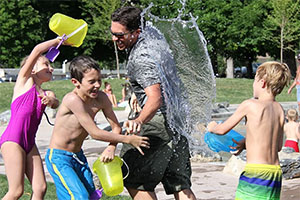 who has at any time (whether before, on or after the commencement of this section) been charged with an offence specified in clause 2 of Schedule 3 if the charge has been finally dealt with other than by way of a conviction or a finding of guilt.1

This means that if a person is charged with a certain type of offence (most commonly a sexual offence) but the matter is withdrawn, or they are acquitted, their application will be a ‘category C application’.

If the Secretary receives a category C application, they must give the person a Working With Children check unless they are satisfied that the person would pose an unjustifiable risk to the safety of children.

The Secretary is obliged to consider certain factors when assessing risk, including the gravity of the offence, the period of time since it was committed and the age of the victims.

This all sounds fine, until someone is wrongly accused of an offence, and charged with a crime they didn’t commit.

That person may defend the charge, and be acquitted by a jury, or the matter may be withdrawn by the prosecution. But they will still have to answer to the Working With Children Unit as to why they were charged.

This absolutely flies in the face of the presumption of innocence. As per the Charter of Human Rights and Responsibilities Act 2006, a person charged with a criminal offence has the right to be presumed innocent until proved guilty according to law. This presumption of innocence forms the foundation of our legal system. It is recognised historically and internationally,2 and throughout the common law.3

Peter downloaded some pornography on his computer. The pornography included consensual sex between adults. He was charged with possession of child pornography, because the police suspected that a couple of the participants might be aged 16 or 17. They decided that they didn’t have any evidence that the participants were under 18, so they withdrew the charges.

Peter is relieved and continues his life as normal. Many years pass. He works with children and there has never been any allegation of misconduct. He applies to renew his working with children check.

The Working With Children Unit ask him to answer many questions such as:

Peter is understandably shocked. His charges were withdrawn many years ago because the prosecution conceded there was no evidence and yet he still must explain himself to the Working With Children Unit.

Obviously, everyone wants children to be safe. And in some cases, withdrawing a Working With Children check is the right thing to do, if there is actual evidence that a person is a risk to children.

However, an application for a Working With Children check should not become a ‘Category C’ application purely because someone is charged and then acquitted, or the charge is withdrawn. A person is entitled to the presumption of innocence until a court decides they are guilty.

Refusing a Working With Children check is a restriction on a person’s liberty. Freedom should only be restricted if the person is assessed as a risk, and that assessment should be based on credible, reliable evidence – not pure speculation.

If you have been asked for further information by the Working With Children Unit, or have been served with an Interim Negative Notice, you should contact our Doogue + George lawyers for legal assistance.