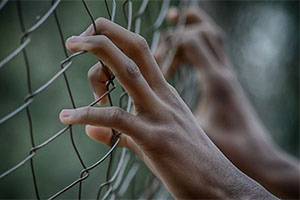 I have countless memories of going down to the cells at Katherine Local Court, to find black wire mesh separating me from a trembling, tired and frightened 13-year old wrapped in a green blanket with their head hung in shame. Only hours earlier, would they have been taken off country, thrown into the back of a police van and driven up to 7 hours through the sweltering Territory outback to access legal representation.

As the former youth lawyer for the North Australian Aboriginal Justice Agency (NAAJA) in Katherine, I saw young people come into contact with the criminal justice system at ages as young as 10 years, and held on remand in a detention centre deemed unfit by the Royal Commission into the Protection and Detention of Children in the Northern Territory in 2017.1

Rehabilitation is a central principle of the Australian youth justice system. However in the absence of the social and cultural infrastructure necessary to support a young offender, I observed incarceration to be readily used, as opposed to being used strictly as a measure of last resort.

Australia’s stance on the minimum age of criminal responsibility

Mr Porter makes these comments in light of United Nations’ recommendations that the minimum age of criminal responsibility should be at least 14 years of age. At 10 years of age, Australian states and territories set among the lowest ages of criminal responsibility in the world.4 This means that any child who is aged 10, can be arrested, found guilty of an offence and imprisoned.

Why is this a problem

At the Justice for Young People conference held in Melbourne in November last year, former head of Medical Services at Parkville Youth Justice Precinct in Melbourne, paediatrician Dr Mick Creati gave an insightful presentation into how the latest neuroimaging of the prefrontal cortex (the part of your brain responsible for planning and impulse control) shows that it isn’t fully developed until the age of 25. As a result, children at the age of 14 years have less developed impulse control compared to adults.5 Dr Creati made the interesting point that you can’t sign up to use Facebook until you are 13 years of age, however can be prosecuted for an offence at 10 years of age.

A most concerning addition to this matrix, is the overwhelming nexus between youths interacting with the criminal justice system facing neurocognitive challenges such as intellectual disabilities, foetal alcohol syndrome, attention deficit hyperactivity disorder, or mental disorders like depression and anxiety related to trauma. A 2018 study of 99 youths in custody in Western Australia found that 89% had at least one neurocognitive or neurodevelopment impairment.6

These statistics highlight that the current system for dealing with young offenders is in fact exponentially decreasing the chance for youths to get out of the system, effectively rehabilitate themselves and go on to become contributing members of the community. Under Mr Porter’s system, Australia is investing into criminality.

What is the legal system doing to recognize the intellectual limitations of a young offender?

The key principle which recognizes that a child’s brain between the ages of 10 and 14 is underdeveloped and often unable to form the relevant intent to commit the crime, is the doctrine of doli incapax. Doli incapax places the burden on the State to prove that the youth was sufficiently intellectually and morally developed to appreciate the difference between right and wrong, distinct from an awareness that such conduct is merely naughty or mischievous.9 This must be proved at the high criminal threshold of beyond reasonable doubt.

The court may embark on this determination by considering a range of factors such as analysing the youth’s action over the course of the offending, have recourse to psychological and psychiatric assessments and educational reports to understand the youth’s mental and intellectual capacity and take into account the youth’s background and upbringing.

In the leading authority of RP v The Queen, the lower courts accepted that the youth’s actions comprising of the use of force, the complainant’s distress and attempts to cover the complainant’s cry for help were indicative of sufficient knowledge of wrongdoing.10 This was overturned by the majority of the High Court bench, who found that in the absence of any evidence indicating the youth’s upbringing, moral development or school performance, it could not be inferred that the youth acquired the requisite knowledge that his actions amounted to serious wrongdoing.

What this means from the practical point of view, is that if you are under 14 years of age and being investigated or charged for criminal offences, you do not have to assist the police in any way. This includes:

Your lawyer does not need to disclose any of the above information on your behalf, however they may determine that strategically, and depending on the particular circumstances of every case, it may be in your interests to do so. Therefore it is very important that you access legal advice and representation to ensure that your rights are being protected.

So while Australia fails in its responsibility to its young citizens, hold on tight to your presumption of innocence.