Protesting – Know where you stand 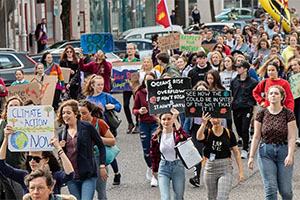 You might have recently seen in the media a lot of coverage about nationwide and worldwide protests about climate change – or you may have even been at one, happily waving a placard in the crowd. Whether you are a long time protester or new to the game – before you head out on to the streets it is a good idea to know a bit about what can happen at a protest and rights for protestors.

Protesting has been around for hundreds and hundreds of years and doesn’t look like it will be ending any time soon (much to the displeasure of our current Prime Minister).1 Protesting has paved the way for many of the things we enjoy today – the right to vote for women, shorter working days to name, same-sex marriage. Much like people, who come in all shapes and sizes, so do protests. You can march, sit in, picket. There could be 10 people, 1 person or 300,000 people in a protest.

While most protests do occur peacefully without arrest or charge, sometimes things don’t go quite to plan. Criminal charges can arise out of a protest.

Your Right to Protest

In Victoria, we have the Charter of Human Rights and Responsibilities that protects our rights to freedom of expression and freedom of assembly.2 You won’t see the right to protest referred to specifically but those other rights cover the area.

Police cannot ask you to ‘move on’ on the street if you are engaged in any of the following:

Often criminal charges arise when there clashes with police (or perhaps other protesters) or protesters have gone into private property without authority and the protests are no longer peaceful protests. In those circumstances, these are some criminal offences that you could be charged with:

If you are charged you will most likely have to attend the Magistrates’ court closest to where the protest occurred.

Do not let the fear of criminal charges put you off attending a protest, as ‘ the ability to speak out publicly to draw attention to a cause, to agitate for change, to protest, is an essential component of democracy’.4 Indeed, protesting is sometimes the only thing a member of the community can do to get their voice heard on a particular issue.

If you or any one you know has been charged with offences arising out of a protest, you should contact our office to discuss your rights and how we can help you.