In defence of Blak life 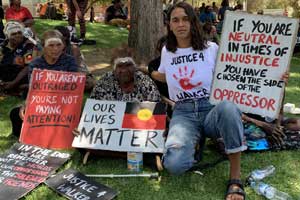 The worldwide outrage following the public killing of George Floyd’s in Minneapolis has demanded a well overdue conversation at home. It is overwhelming to see the outpour of solidarity from many Australians in response. For us, this has led to conversations with colleagues, family and friends about the disproportionate rate of Aboriginal deaths in custody and the toxic relationship between indigenous people and police.

For us as lawyers this conversation usually seems to feel like it is ‘in a vacuum’. Like many well-meaning people, we are exhausted from the frustration and disappointment of continually going up against systemic racism that Aboriginal people face in our criminal justice system.

In November 2019, a young Warlpiri man was shot and killed by a police officer in Yuendumu, Northern Territory during his arrest. Several teams of lawyers was assembled by Sydney based barrister Andrew Boe, to assist the family and community in the days after the tragic event. Our firm has been engaged to lead one of these teams.

It seems that many Australians are donating their time or money to causes and charities for Aboriginal people in recent days. Many lessons from the Black Lives Matter movement in the United States are being followed on home soil including rallies to be held across the country.

Blak voices are getting louder and we feel privileged to be behind them on this.

If you are involved in protesting this weekend and have legal questions, call Doogue + George for advice.