Home » Criminal Justice » Beyond Reasonable Doubt and the Rush to Judgement

Beyond Reasonable Doubt and the Rush to Judgement

Josh is one of the partners at Doogue + George and is an accredited criminal law specialist based in our Melbourne office. He is a criminal trial expert and specialises in indictable crimes.

With over a decade of experience, Josh acts as a defence advocate for every client he represents in court. He was acknowledged as a Leading Lawyer in the Doyles Guide 2020 and was one of two finalists in the category of In-House Counsel Of The Year at the 15th Victorian Legal Awards. 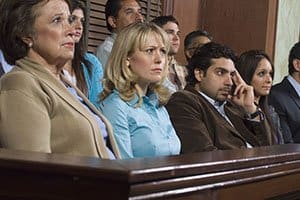 In the past when our community was less secular and strong Christian values were more universally and widely held, it was not uncommon that jurors would be reluctant to or refuse to sit in judgement of another person. This was a strict application of the ‘judge not, lest ye be judged’ principle.

Such views were commonplace over the centuries in which our system of criminal law developed. The views were so commonplace that they lead to difficulty in securing verdicts and lead directly to the development of one of the cornerstone principles of our system. That proof beyond reasonable doubt is required. Today we understand that principle as one that protects the accused person.

In his book ‘The Origins of Reasonable Doubt’, American scholar James Whitman traces the origin of the principle through Christian tradition and common law history.

Put very shortly, he explains that in Christian tradition, a person who experienced doubt yet convicted an innocent accused was guilty of a mortal sin. Jurors fearful for their own souls were reassured that they were safe in acting, safe to convict so long as their doubts were not reasonable. That is where the concept of beyond reasonable doubt has its origins. A principle designed to encourage more convictions.

Today we understand it in a completely different way, as a high bar to conviction, the highest standard known to the law. Whitman traces the development of the principle and how it comes to operate in the present American system:

‘The best lesson to draw from the history of reasonable doubt is not a lesson about how to apply reasonable doubt correctly, either according to its original intent or according to its original context. Those are senseless goals. The real root of our confusion about reasonable doubt has to do with the fact that we have lost the old conviction that judging and punishing are morally fearsome acts. We have a far weaker sense than our ancestors that we should doubt our own moral authority when judging other human beings.’There were tough-on-crime programs in the past just as there are now. But in our own tough-on-crime era we find it easy to forget what Christian Jurists remembered during the tough-on-crime era of the late fifteenth century:

“The judge must be brought to punish only in sorrow… if the judge glories in the death of a man, as no small number do in our age, he is a murderer.”

We have lost any sense that the challenge facing any humane system of law is to protect the guilty as well as the innocent.

Judgement in the sense that Whitman is referring to surely applies equally to the decisions of sentencing judges who punish and jury’s decisions about guilt.

But it must apply equally to the judgement that occurs in media coverage, statements by politicians and the views expressed by the community. One of the principal issues for criminal lawyers is the social and media context in which we practice. We practice in a time where whatever reluctance to judge existed in the past, whatever understanding that we should doubt our own moral authority when judging other human beings has disappeared almost completely.

Now the opposite is true, the media and the community are ready with a reaction, a headline judging the system and those who work within it based on only the smallest amount of information that has been publicized. The willingness to judge on so little information, without being fully informed contributes to the creation and then reinforcement of views in the community that “the system is soft on crime”; “judges and lawyers are out of touch”; “lawmakers are not listening”.

The media and its coverage of criminal law issues is at the heart of this problem but is not the sole cause.

The danger of populism is the erosion of the reluctance to judge. I am fearful that the eagerness to punish, the eagerness to judge, will lead to an undermining of the fundamental features of our system of law.

Tough-on-crime politics and tough-on-crime media coverage, the reporting of artificial ‘law and order crises’ in times of record-low crime rates, will continue to create these kinds of challenges and fuel calls for ‘reform’ which actually represent radical overhauls of the system.