Home » Criminal Justice » Are you at risk of losing your security licence because you have been charged with a criminal offence?

Are you at risk of losing your security licence because you have been charged with a criminal offence?

The article Are you at risk of losing your security licence because you have been charged with a criminal offence? is written by Tyson Manicolo, Associate, Doogue + George Defence Lawyers.

Tyson was admitted to practice in 2016 and currently heads our Broadmeadows office. He previously worked for a generalist firm that deals with both criminal and civil matters but later decided to practise exclusively in the area of criminal law.

Tyson regularly represents clients in various Victorian courts. His expertise includes a broad range of legal matters including appeals, bail applications, and intervention orders, as well as writing submissions for people at risk of losing their firearm or security licences. 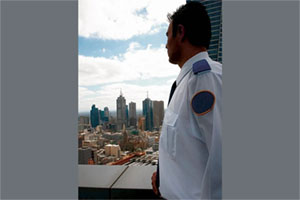 This process undermines Licence holder’s presumption of innocence afforded to people accused of wrongdoing. Also, criminal matters take months or, for more serious offences, years to resolve and finalise during which time, a Licence holder is barred from working in the security industry. Furthermore, preventing a Licence holder from working can affect their plea hearing because Magistrates and Judges are generally interested in knowing that someone is gainfully employed.

Power to Interfere with Licences

The Commissioner will consider if the Licence holder is a “fit and proper” person and if it is in the “public interest” for the person or company to be Licenced or if you are to lose your security licence because you have been charged by police.

A person must be a “fit and proper person” to get a Licence. However, the Private Security Act does not define the expression – “fit and proper person”. The High Court of Australia stated that this expression ‘takes its meaning from its context, from the activities in which the person is or will be engaged and the ends to be served by those activities.’1
The following can be relied on to demonstrate to the Police Commissioner that a Licence holder satisfies this requirement:

It must be in the public interest for a person or company to be Licenced. Again, the Private Security Act does not define “public interest”. Cases have considered that the public needs Licence holders to be ‘honest, trustworthy and behave with integrity’.

The following can be relied upon to demonstrate to the Police Commissioner that a Licence holder this requirement:

If you or your company are subject to an inquiry and are at risk of losing your security licence because of a criminal offence, you should call Doogue + George Defence Lawyers to speak with solicitor, Tyson Manicolo who has experience in writing successful submissions in these types of matters. Tyson understands the priority these types of matters must be given because it may result in you not being able to earn an income.