Home » Court Process » Sentence Indication in the Magistrates’ Court – What are They and How are They Used?

Sentence Indication in the Magistrates’ Court – What are They and How are They Used?

The article Sentence Indication in the Magistrates’ Court – What are They and How are They Used? is written by Tyson Manicolo, Associate, Doogue + George Defence Lawyers.

Tyson was admitted to practice in 2016 and currently heads our Broadmeadows office. He previously worked for a generalist firm that deals with both criminal and civil matters but later decided to practise exclusively in the area of criminal law.

Tyson regularly represents clients in various Victorian courts. His expertise includes a broad range of legal matters including appeals, bail applications, and intervention orders, as well as writing submissions for people at risk of losing their firearm or security licences. 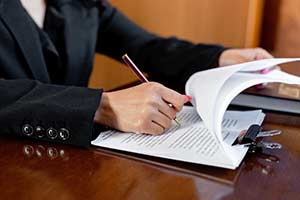 A sentence indication is usually applied for where an accused is open to resolving their matter, but may disagree with some aggravating aspects of the police summary, which prosecution insist on proceeding with. For example, a person charged with an assault causing injury may have made admissions during the police interview to striking the victim, but may not accept that they struck the victim multiple times as alleged in the police summary. In this scenario, it is not always in the accused’s best interest to take the matter to a contested hearing to dispute the number of times they struck the victim because they would lose the benefit an early plea of guilty attracts. In this case, a sentence indication is a sensible alternative because a Magistrate may indicate that the penalty will not change depending on the number of times the summary alleges that the accused struck the victim after hearing factors in mitigation. This indication may give an accused comfort to finalise their matter.

Another instance where an accused person may apply for a sentence indication is where they don’t want to go through the ordeal of a contested hearing, but are concerned about the penalty they might receive if they lock themselves into a plea of guilty where they are at the mercy of the Magistrate. This gives an accused person some control over their matter because they are able to make an informed decision about whether or not they will accept the penalty indicated.

An accused person who receives a sentence indication is not bound to accept the indication if the penalty is greater than they are prepared to accept. For example an accused person may be open to finalising their matter if a conviction was not recorded, because a conviction may affect their employment. However, if the Magistrate providing the indication is not persuaded that a ‘without conviction’ disposition is appropriate, the accused person can decide to continue to contest their matter if there are contestable issues. This must be given some thought though if the police case is strong because the outcome could be worse if found guilty after a contested hearing.

An accused can only apply for one sentence indication during the life of a matter so it is important to treat it seriously and prepare for it. You must “put your best foot forward”. The Magistrate providing the indication will make a note on the Court file that a sentence indication has been provided for other Magistrates who preside over the matter to see. However, I have experienced Magistrates agreeing to provide another sentence indication because after further discussions with prosecutors they agreed to substantially amend the police summary or the accused may have been charged with further offences after the indication was provided.

It is worth noting that a sentence indication cannot be used against an accused person if they decide to take their matter to a contested hearing.

Feel free to get in touch if you would like to discuss sentence indications and if it is the right thing to do in your case.