What this defence lawyer gained from the 2014 Anti-Corruption Conference 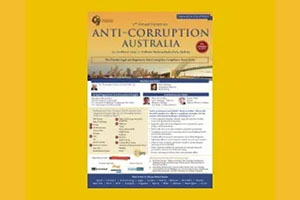 How quickly a year passes.

Last year I wrote about attending the first Australian anti-corruption conference in Sydney and have now just returned home from the second.

This is a conference aimed at compliance professionals within the corporate sector, large commercial law firms and forensic accountants. The emphasis is on compliance and prosecutorial enforcement.

In that vein, the opening keynote speaker gave a considered address on the consequences of corruption. The Honourable Terrence Cole AO RFD QC appears to hold a very negative view of human nature; for him dark corners requiring illumination dominate the landscape of our community. His comments on the destruction of individual reputation for the greater good bespeak a utilitarian. And, irrespective of your view of his opinions, it was a thoughtful presentation.

The contrast with the next keynote was stark. Intrepid reporter from Fairfax Media, Nick McKenzie began, as you might, if you also had within your own catalogue, a 5 minute excerpt of himself from the 4 Corners report COVER UP aired in late 2013 about the Reserve Bank and Securency bribery scandal. What then followed was his view of the Banknotes case with colour slides and power points with different size fonts, I guess to keep our attention. It must have been his stump speech as it was out of date and inaccurate.

I couldn’t help but feel a little fleeced by this speech, I thought we deserved a bit more effort. Accompanying Mr McKenzie was whistleblower and witness Brian Hood, who appeared happy enough sharing the stage and being touted by his friend as an excellent consultant to the assembled crowd.

We also heard from US regulators about the vast sweep of their jurisdiction and desire for self-reporting. Charles Duross was, until 5 weeks ago, the deputy chief of the bribery section of the US DOJ. Now he’s in private practice defending those he prosecuted a month ago or representing, as he said, “those poor misunderstood folks”. I’m certain he’s a nice fellow, but I’m glad he’s not my defence lawyer.

I did gain much from attending this conference. Overarching my seemingly contrary comments, above, I am reminded and assured of the vital perspective that a criminal defence lawyer brings to these particular cases. We are never cynical about our clients, we credit evidence over assumption, and most importantly for those we are representing, we will stand between the often overwhelming resources of the State railed against an individual, who is often just doing their job.