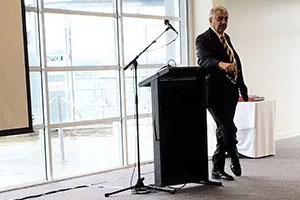 Hobart barrister, Greg Melick AO SC was appointed Tasmania’s Chief Commissioner of the Integrity Commission in August 2015.  When he spoke to ADLA attendees at our recent conference, Mr Melick pointed to the extraordinary powers of anti-corruption bodies and emphasized that these powers should be guarded and not abused.

While not always evident in the media, particularly in Victoria, anti-corruption bodies should serve the purpose of eliciting and investigating in order to sort out problems within local government rather than trying to find people to prosecute.

Many examinations are conducted in public hearings. Mr Melick pointed to the substantial injustice caused by such hearings where witnesses are paraded in the media. If a witness is to be charged with criminal offences stemming from examination, their fate is sealed through a public hearing.

Mr Melick emphasized the need for ADLA attendees, as legal representatives, to argue for a private hearing for their clients.  IBAC cannot guarantee that a client will not be charged with criminal offences, they cannot do this until the evidence of that witness is heard in examination.  As such they are unable to ensure there will not be any prejudice to the client if charged.

Submitting yourself to an examination is unnerving and extremely stressful.  Witnesses summonsed to appear before IBAC do not have the protection against self-incrimination usually afforded to those involved in ordinary criminal investigations.  Further, a person summonsed to appear before IBAC is likely to be served with a Confidentiality Notice preventing them from discussing the matter with anyone other than their legal representative.  Breaching these strict confidentiality requirements may result in criminal prosecution.

For these reasons, it is important that you seek experienced legal advice and representation from solicitors familiar with IBAC and your obligations under the IBAC Act.

During an IBAC hearing, a witness may feel compelled to answer questions that appear to be outside the terms of reference or scope of matters identified for examination.  It is an offence to refuse or fail to answer questions during examination without reasonable excuse.  While you may feel justified in refusing to answer, IBAC may also withhold the basis or nature of matters for questioning if it identifies that an investigation would be prejudiced or it would be contrary to public interest to reveal that basis.  You are damned if you do and damned if you don’t.

Mr Melick said that you can never be 100% sure a question is outside the ambit of reference.  He stressed that many witnesses and even uninformed legal representatives make the mistake of thinking the inquisitors are idiots.  To the contrary, they have significant records justifying the summonsing of that witness, including telephone intercepts and financial records which are by nature difficult to refute.  Advising a witness not to answer a question potentially places them in contempt without a defence and subject to criminal penalties.

Mr Melick asked the ADLA forum to identify an appropriate response when a client is placed in this position.  It was agreed that in this situation, the most appropriate course of action would be to object to the question being asked and note that it is outside the terms of reference. Further, advise IBAC that if the client is going to be compelled notwithstanding objection, place on record that we will seek judicial review of questions being asked pursuant to the Administrative Decisions (Judicial Review) Act 1977.