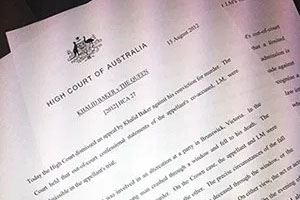 Yesterday there was an enormous amount of media coverage of the High Court decision to dismiss the Appeal by Tobacco companies against plain packaging.

The High Court also dismissed an appeal by our client yesterday, against a conviction of murder.

Customarily, we suppress the names of our clients in any articles or case studies we publish in an effort to provide them with some level of anonymity and respect of privacy that the media, often, does not. It is our view that they have been through the judicial system (as well as possibly a life-changing ordeal) and whether convicted or acquitted, they should be given the opportunity to move on with their lives.

That said, I am going to reproduce, verbatim, the press release circulated yesterday, 15th August 2012 and then I am going to tell you how I feel about it. I think you will understand now that he is convicted of murder it will be quite a length of time before he is released.

Today the High Court dismissed an appeal by Khalid Baker against his conviction for murder. The Court held that out-of-court confessional statements of the appellant’s co-accused, LM, were inadmissible in the appellant’s trial.

In 2005, the appellant was involved in an altercation at a party in Brunswick, Victoria. In the course of the altercation, a young man crashed through a window and fell to his death. The appellant and LM were charged with murder. On the Crown case, the appellant and LM were acting in concert, or one was aiding and abetting the other. The precise circumstances of the fall were unknown. A push or punch may have projected the deceased through the window, or the window may have shattered as he backed away from the altercation. On either view, the act or acts of the appellant and LM were capable of being the legal cause of death. On the evening of the incident, LM admitted in a police interview that he had pushed the deceased. LM also made statements to witnesses which were capable of being viewed as an admission of responsibility for the deceased’s fall.

By special leave, the appellant appealed to the High Court on the basis that LM’s out-of-court statements were wrongly excluded. The appellant’s principal contention was that a limited exception to the hearsay rule should be allowed for joint trials where a co-accused’s admission is reliable. The appellant argued that LM’s admissions were reliable because they were made against LM’s penal interest. The appellant’s broad contention was that it was appropriate to recognise a new exception to the hearsay rule for third party confessions in order to bring the common law into line with the uniform Evidence Act provisions governing the reception of hearsay evidence when a witness is unavailable.

The High Court dismissed the appeal. The Court held that the exclusion of the out-of-court statements was not unfair and did not occasion a miscarriage of justice in the appellant’s trial. The appellant had intended to rely on LM’s statements as an admission that LM had caused the fall of the deceased. However, the Court found that LM had not made such an admission: he admitted to pushing the deceased, but did not admit sole guilt. Further, LM’s assertions which conveyed that the appellant was not involved in the assault on the deceased before his fall were not evidently against LM’s penal interest. The admissions were also consistent with the Crown case.

Let me boil down the above release into its concentrated form, laced with a bit of What I Know:

Khalid Baker and LM got into a scuffle with other people at a rave. They were both teenagers at the time. There was some shoving and a decent young man who was doing nothing wrong, was pushed backwards. He fell out of a window and died. Khalid and LM were both charged with murder. LM admitted in a police interview that he pushed the guy. Witnesses attested that LM made other statements that indicated he pushed the guy. They both go to trial.

The Court ruled that LM’s statements were inadmissible in Baker’s case.

So the Barrister for Baker at his trial is not permitted to relay to the jury what LM said and how that impacts on the evidence before them.

LM is acquitted (that is, found not guilty by a jury), Baker is found guilty of the murder.

To give you further scope, our client is a young Somalian man. Always very pleasant to us and a very charming character. He is always thankful to us for our efforts and never blames us.

On the night in question he clearly assaulted a number of people inside the rave in a terrible manner as did a third party. But what happened on the landing?

It is always sad to see a case where witnesses can be characterized as being divided in racial camps. That is the way these things pan out sometimes.

There were a number of black witnesses who said it was not Khalid who pushed the man towards the window.

There were white witnesses who said it was Khalid. They were articulate and understood the concept of how evidence is given. That does not mean their evidence was more truthful than the others in conveying what they think happened, in a flurry, on the landing. They just told their story better. Honest people make mistakes about identification all the time.

What the jury was not privy to was what LM communicated to Khalid and us about his instructions to his solicitor. What they did not hear was Khalid’s grounds for not giving evidence of what he saw happen on the stairs.

Criminal law is a horrible, murky shade of grey at times.

This is no reflection on the jury. They applied the law as they were told to do – ignore the statement from the co-accused on Khalid’s trial. It really isn’t an adverse reflection on any part of the system. Everyone; Prosecutors, Judges and Barristers did their jobs properly.

People talk in such absolutes about Court cases and guilt. I was not there on that sad night.

The jury has made their decision and the High Court have applied the law as they deem it to be.

As a criminal lawyer it is par for the course to be questioned on my moral standing. How can I defend…criminals? Let me be clear. I love being a criminal lawyer. Much of what I do is making sure an innocent man, like your brother or son, has not been completely swept up in an unfortunate bar-fight maelstrom. Or that your mother or friend who really didn’t see that pedestrian blindly step out in front of their car is not put in gaol. As well as defending… criminals, or people who have done bad things, we also defend people who have had bad things happen to them, that have found themselves in the wrong place at the wrong time, that are just a product of this peculiar world we live in.

We do often fight the good fight.

And, yesterday we lost.

It doesn’t mean we won’t continue to fight these fights.

But for Khalid and his mother and family, that brings little comfort.